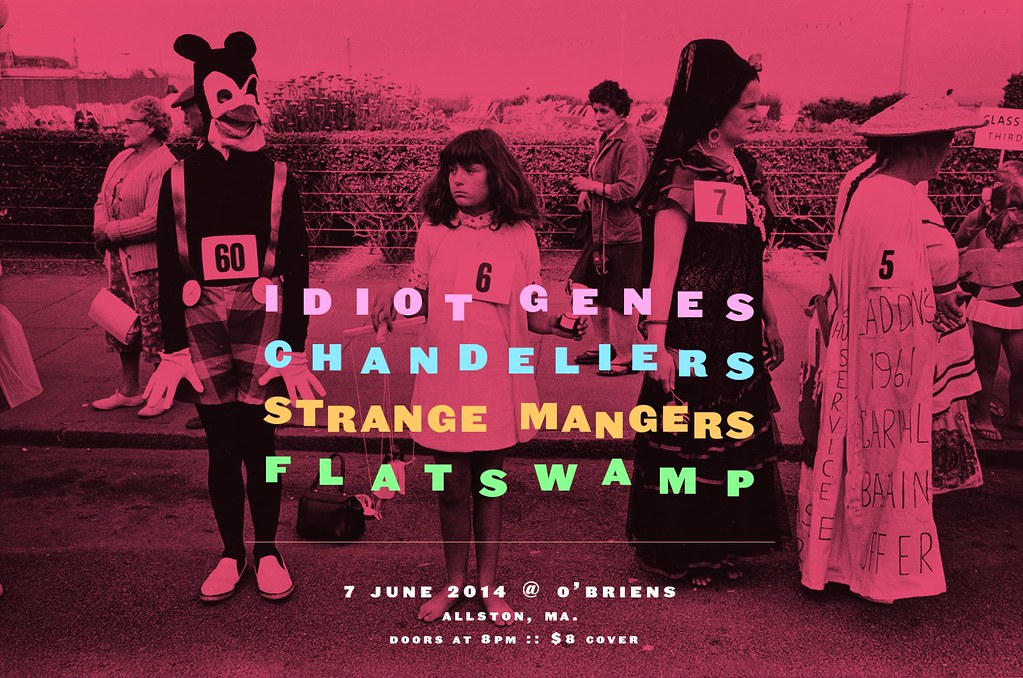 Is this the last show flyer you'll see that refers to Boston anxiety-pop heroes Chandeliers by that name? Maybe! Attentive fans likely saw the threesome announce a name change late last month, and know that henceforth the act will be called Chandos (look, we already put it in the headline). We'll leave it to you to speculate for yourselves why a band might make that kind of change, although if you've ever googled them you've already figured the easy part of it out. And, really, it's what's on the inside that counts, right gang? Whether their amps have "Chandeliers" or "Chandos" stenciled on there matters little; it's the trio's characteristic jittery jangle that puts the proverbial asses in the figurative seats. Which is hopefully where they'll find you tomorrow night, specifically at O'Brien's Pub in Allston Rock City. There Chandos anchors a ridiculous evening of aural entertainment that also includes fuzz-faces Idiot Genes -- one of the first signings to the new Eye Design Records label -- as well as candied-punk purveyors Flat Swamp and the more progressive, twinkly indie rock of Strange Mangers.

While Chandos and Idiot Genes have been known quantities to us for years -- we last wrote about Idiot Genes here in November, and our coverage of Chandos goes back to 2010, as we said here -- Flat Swamp and Strange Mangers had not yet traversed our ear canals until early this week. We're happy to report both make rock sounds we like. We're particularly interested in Flat Swamp, which features Ovlov drummer Theo Hartlett on the guitar and sing-sing and also counts among its number Grass Is Green drummer Jesse Weiss. You read that right: this band, which is very good and wears its Weezer influence right there on its collective, comically oversized novelty sleeve, has two key players that are also drummers. It kind of takes some air out of all of those old hackneyed drummer jokes, yeah? Maybe they can get Dave Grohl on their next record... In the meantime, we certainly recommend you check out their cassette El Jefe/Nicolas Cage Match, which was released a year ago by Midnight Werewolf, and which contains lotsa windows-down-driving-fast-shouting-along-fist-pumping anthems. You like those, right? Indeed, every act on the bill tomorrow night has something hot for you to hear, so spend some time now with the links below, put on your socially acceptable pants tomorrow, and come check out the show with us tomorrow night. Full details are at this Facebook event page. Support the spleen.