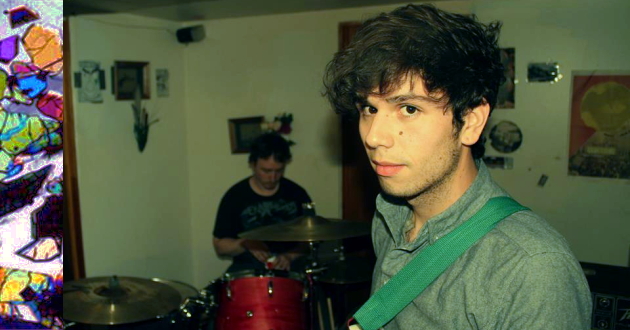 He rumbles the thunderstick for Boston anxiety-pop phenoms Chandeliers, he blasts the bottom end for Boston-and-New Hampshire-based shoegaze goliaths Bedroom Eyes, he does a bunch of other stuff, too. And now Sean Tracy is doing Regolith, Clicky Clicky's still new-car-smelling, month-long songwriting challenge. Attentive readers will recall it was just last month that we unveiled the results of Regolith Series 1, which featured scene stalwart Reuben Bettsak, and which produced this pretty dynamite collection of music (some of which will be performed this Sunday). We are very excited to have Mr. Tracy as our next songwriter-in-his-own-residence for this tripartite series. He's a New Hampshire native that has been keeping it real in the greater Allston/Brighton for several years, and we've been a fan since way back in 2010, when we put Chandeliers on a very hot bill at Precinct in Somerville, MA. As we mentioned supra, Tracy is also now playing bass in another Clicky Clicky fave act, Bedroom Eyes, which just released a totally sick new track called "Wild Sins" that we've embedded below. Incidentally, both acts he now plays with contributed tracks to our 2012 RIDE tribute comp NOFUCKINGWHERE. We think membership in two of the city's best bands is reason enough to bamboozle a gal or guy into doing Regolith, don't you? Either way, Tracy graciously has taken up the gauntlet and recently began work in earnest. We'll be sure to keep you apprised, as is the Regolith way, but before we go too much further, let's get acquainted. -- L. Tiburon Pacifico

CC: What is happening with your various projects right now?

ST: Chandeliers is coming out with a full length LP this year. It's 12 tracks we recorded in January, that were written over the last two years or so. I'm really excited about it, and can't wait to put it out. We're doing a 2-day trip [this] week, out to Connecticut and Philadelphia, two places we have never played before, and planning a longer tour once we have records to sell.

Bedroom Eyes just released a single for a compilation and, besides that, we're finishing up some material that was tracked before I joined the band. That should be out soon. Besides that, we're writing new songs for an EP that we'll hopefully record later this year.

I played in/play in a band called Dye (briefly, emphasis on briefly, called Kardashians). It's now mostly a recording project consisting of me and my friend Sam. We played two shows before he moved to the west coast and we have yet to release anything, but have 6-7 recorded songs that I really hope we will release this year. We practice as much as we can given the distance, maybe 2-3 times a year.

CC: What instruments do you play? When did you start playing them?

CC: How long have you been writing music?

ST: I guess ever since I got my first guitar. I always tried to write my own parts, really simple ones at first, even though I couldn't really translate the ideas into actual playing. I actually sort of learned how to write songs by recording my own stuff with Garageband when I was around 19 or 20, and that's when I started messing with multi-tracking, learning how to mix audio, junk like that. And then after being in a band that worked on songs together, and seeing how that process went, I kind of eventually started working on more complex parts and full songs of my own.

CC: What are your songwriting influences? Do you feel like there's an influence on your music that is obvious to you but might not necessarily be apparent to a listener?

ST: Very, very many. I guess the biggest influences are my favorite bands, mostly jangly guitar bands from the '80s, and c86 bands: McCarthy, The Bodines, The Smiths, The Jesus & Mary Chain, My Bloody Valentine, '90s Slumberland stuff, especially Black Tambourine and Henry's Dress. Early Modest Mouse, '90s Kinsella-sphere emo, like Cap'n Jazz, American Football, Joan of Arc (that first album), The Promise Ring, and other stuff like Sunny Day Real Estate, Braid, early Fugazi, and older punk bands like Minor Threat, Bad Brains and The Wipers. For more contemporary stuff, Grouper, Deerhunter and Broadcast. Is this too many? [No. -- Ed.]

I've also got a real place in my heart for old doo-wop stuff, like from the '50s and '60s. Not that I think that sound influences what I write, but I really admire how simple, in terms of structure and lyrics, that most of those songs are. But you can still tell there's real emotion that goes into it.

CC: How would you describe your songwriting (not recording) process. Are the songs planned out, or is the process more organic, with single chords or melodies developing into parts, which then develop into songs? Or do you have a back catalog of riffs/parts/progressions that you mix and match until they find a home?

ST: Well actually, I write quite a bit by recording. If I have one or two parts that go together, I'll record it and listen for how another part might work its way in there. Hearing something play back usually helps me decide what works and what doesn't, and where structural things and transitions should go. It feels a lot different playing a song vs. hearing it recorded. It's almost like how I "proofread" a song.

Typically I'll have a few parts that will not really have a set order/duration, but almost always the part that comes to me first ends up being the chorus, and I kind of work the other parts around that.

CC: Do you normally write your songs alone, or are you used to writing with others? Will this project change the way you typically write?

ST: Most of the songs that I write, I write by myself, so this is actually somewhat normal for me.

CC: Where will you be doing your writing and recording throughout this project?

ST: My bedroom/apartment, and maybe some in my practice space.

CC: What are your goals/aspirations for this project?

ST: My goal is really to push myself outside of my comfort zone, and by that I mean, actually PRODUCE something. Since I was 19, I have started writing and recording literally dozens of songs, some finished, many more unfinished, but zero that I've formally released. It's partly an insecurity thing, but it's also an attention span/schedule thing: I have ADHD, I work full time, I play and practice in two bands, and I have a girlfriend. There's not a lot of time in between for me to focus on songwriting, and this is a really good excuse for that, and it's just a cool idea for a project, too.