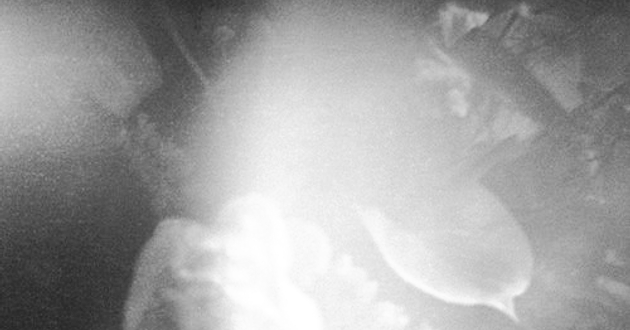 >> Calgary guitar-pop quartet Faux Fur would seem to have been tailor-made for the reliable Brighton, England indie label Faux Discx -- and not just because of its name. Indeed, the foursome's off-center, post-punk aesthetic and skewed pop smarts make them a natural fit for the rock-solid label, and are in keeping with certain prior releases lauded by Clicky Clicky. Exhibit A is Faux Fur's scratchy gem "Rough Palms," which alternates choppy strumming and spiky arpeggiation in the foreground while a subdued vocal slouches in the middle of a bright, trebly mix. "Rough Palms" features on Faux Fur's self-titled long-player, which was self-released last year via Bandcamp, where it is still streaming in full. That aforementioned brightness doesn't carry through the entire record, however: instead, much of Faux Fur exists in a pleasantly murky, semi-dream state. Faux Discx will re-release the collection April 28 in a limited edition of 100 grey cassettes and as a digital download. The cassette appears to carry different art than the self-release, but we assume it is otherwise the same delightful 10 songs, songs that crackle with nervous energy, songs that bewitch by holding back just enough to make the crescendo of "Stoop" jarring, and the uptempo rocker "I Saw You Standing" rocking. Faux Fur is a striking little collection; order it from Faux Discx right here, and stream both "Rough Palms" and "I Saw You Standing" via the embeds below.

>> While the details are so slim as to almost not qualify for a reference in the plural, visionary dream-pop collective Mahogany disclosed this week it will release an EP titled Electric Prisms next month. The (presumably) short set of music will be released May 27, the final night of the act's month-long Tuesday night DJ residency at a hotel in Manhattan. On that final night only, Mahogany will perform live, while shoegazer Tamaryn and a member of Fleet Foxes will execute DJ sets. Mahogany will have a limited number of (again presumably) physical copies of Electric Prisms on hand; pre-orders for a vinyl edition and release via other unspecified formats (wax cylinder? Dataplay?) will begin on or around May 25. We last heard from Mahogany a year ago, when the act (once an octet, now a duo comprised by Andrew Prinz and Jaclyn Slimm) issued the transcendent eight-minute single "Phase Break," which understandably drew raves from our own Edward Charlton right here. Revisit "Phase Break" via the embed below, while we keep our ears to the ground for more details.

>> Electro-acoustic luminary Colleen disclosed to her email list this week that she has begun recording the follow up to last year's magical The Weighing Of The Heart [review]; this in and of itself might not be news save for the fact that there was a six-year gap between The Weighing Of The Heart and her previous collection, 2007's Les Ondes Silencieuses. The planned new record will not only come relatively hot on the heels of the 2013 set, but it will also be the fifth released by Colleen, a/k/a the French-born but now Spain-based Cecille Schott. Ms. Schott hopes the new music will be released in late 2014 or early 2015. And while we don't want to jinx anything, the new album will almost certainly be easier for Schott to make. When she was recording The Weighing Of The Heart, she had to work just a couple hours at a time and late, late at night because her studio was not insulated from the noise of the surrounding streets. However, recently the studio, which Schott has dubbed The White Ark in homage to Lee Scratch Perry, has been (not quite completely) soundproofed, meaning Schott can theoretically choose to work at any hour. What will the new music sound like? We have no idea. The Weighing Of The Heart was notable for its more pronounced rhythms and the incorporation, for the first time, of Schott's serene and light vocals into her songs. Presumably the 2013 record will be a jumping-off point for the new music, but Scott's restless exploration of her muse means no possibility can be ruled out; stream all of The Weighing Of The Heart via the YouTube embed below.