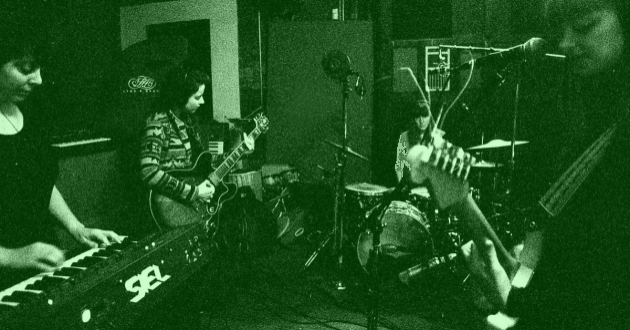 >> Philadelphia's Myrrias is a relatively new quartet which played its first shows late last year, but a short set of demos already has us very excited about the future of the futurepop act. The all-lady combo's "Focus," "Pattern" and "All Alone" were recorded by brilliant Philadelphia producer (and Arc In Round ringleader) Jeff Zeigler, and their fully realized, airy dream-pop suggest that the band has great respect for notable forebears like Lush and Cocteau Twins. A bit of Googleplexing indicates that the foursome is comprised of Philly scene veterans, including fronter Mikele Edwards, who also plays in the aforementioned Arc In Round, and drummer Casey Bell, one cog in the machine of guitar-pop upstarts Break It Up. Myrrias' terrific digital single "Focus" boasts icy and engaging guitar and synth, a galloping bass line, tom-centric drumming, and arrestingly layered vocals (as well as Mr. Zeigler's characteristically rich aural texture). April Harkanson's spiraling guitar work is immaculate, with layers of effects adding a palpable edge and electric excitement to lead guitar lines that seem to grow ever wider and wilder. The dual female vocals are a joy, and the close harmonies remind this reviewer that such an effect is all too rarely employed by today's indie rock bands -- a real shame. Myrrias state the song, and two others available to stream, will feature on an forthcoming full-length, which we are now very keen to hear, so hopefully momentum is in place to get more music in the proverbial pipeline. If this is the future of Philly indie rock, sign us up. Myrrias' next show is in Philly at Ortlieb's May 22nd. In the meantime, all three songs can all be streamed via the Bandcamp embed below. -- Edward Charlton

>> And more from Philly: from our lofty vantage point it appears as if the focus of any purported '90s revival (to the extent such a thing exists -- a discussion for another day -- and as opposed to the '80s Revival -- Ed.) of the last few years has shifted sub-genres: where contemporary acts once doggedly mined the noise-pop and shoegaze sounds of Sonic Youth and My Bloody Valentine and bands like them, downer grunge and sludge rock now seem to be coming into their own as sonic signifiers. "Wet Bread," from Philadelphia nu-gazers Creepoid, is among the latest songs to wow us, and would seem to have identified a cozy place in the middle. Hot on the heels of the band's self-titled sophomore set on No Idea records, this latest cut features on the forthcoming Wet 12" EP. The short set will be available for Record Store Day later this month via the mighty Graveface records. All four songs are programmed on the A-side, the flip features an etching, and the vinyl is hand-poured by Daniel Huffman of New Fumes. "Wet Bread" rolls out a deep, woozy guitar groove like so much thick pink fiberglass insulation, a sound turgid with distortion. Hooky, spoke-sung male vocals guide the verses and harken back to the slinky, reflective and narcotics-infused croon of, although we hesitate to say it, Kurt Cobain (you know, before he would start screaming during Nirvana's choruses). The EP exhibits remarkable diversity amongst its four tunes: "Blinding Halo," a piano-appointed, atmospheric composition, marshals a marching cadence, eerie guitar feedback, and sampled conversation that again reminds this reviewer of Mr. Cobain's wandering surfer drawl. Closer "Truth" highlights Anna Troxell's vocal, mixing it high as half of a smokey duet, amid bent guitar notes and the tune's generally gnarled glory. -Stream "Wet Bread" via the Soundcloud embed below, and get thee to a hip IRL record retailer April 19 to get your hands on the special one-sided 12" -- Edward Charlton

>> New Zealand noisy guitar-pop heroes Popstrangers are extending a very productive streak in the wake of its excellent 2013 album Antipodes (which we wrote about here and here) and a great 7". Last month the trio announced a new full-length, Fortuna, which will be released by Carpark Records May 27. A winning preview single from the set called "Country Kills" highlights a restless band drawing on a wider array of influences. The tune's choppy, two-chord riff and skittering drum cadence in the verse bash out a pleasing if awkward groove, one that is all the more engaging because of its curious posture. Especially pleasing are the slightly dissonant lower notes on the guitar, which counterbalance the higher tones establishing the groove and take a dynamic downward run at the end of each verse. Unsurprisingly for Popstrangers, the chorus touts a pretty-yet-aggressive, anthemic dimension that feels scaled for the arena. A brief bridge unexpectedly and momentarily steers the song into epic dream-pop; the unexpected, cascading and beautiful tumble suggests Fortuna may be the record that cements the Popstrangers as New Zealand's most vital and original contemporary pop artists. Pre-order the 10-song set from Carpark right here, and stream the completely dynamite "Country Kills" via the Soundcloud embed below. -- Edward Charlton