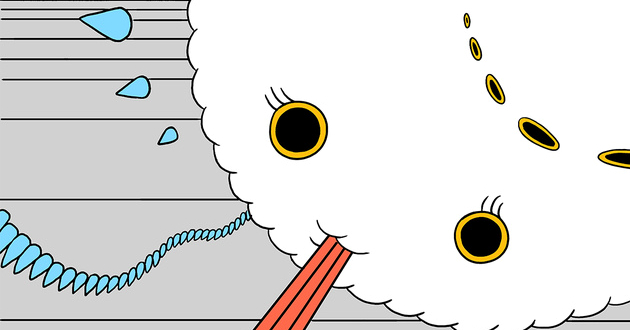 >> When it comes to rocking songs, how does one objectively define a blaster? A banger? A stomper? It's a deceptively interesting question to ponder, even while sober (maybe), but at the moment the easiest answer might be to direct answer-seekers to the electrifying "Milkman" by Nashville indie rockers Bully. The song comprises the top half of the threesome's new 7", which was released April 25 on Chicken Ranch Records with "Faceblind" gracing the flip. The up-tempo (a blaster's gotta be uptempo, right?) "Milkman" metes a master class in how to concoct an A-side, while proffering some of the most riotous guitar pop we've heard this year. Bully's new single follows three pressings of the act's self-titled EP [as we wrote here] with tracks that feature similar sonics but even more power and more purposeful production. This reviewer is not a rich man, but he'd wager a fiver that the two-minute "Milkman" blows up in the underground in the coming weeks. Fronter (and producer) Alicia Bognanno drives the song's propulsive tempo and tried-and-true chord changes with her affectingly raspy soprano, which is reminiscent of that of Juliana Hatfield. Ms. Boganno's would seem to be a voice destined for greatness -- it's equally effective at punk sneers, candy-coated hooks screamed down an ear, and precise self-harmonizing, a rare gift. Also worth mentioning: "Milkman" presents some of the most tasteful cowbell heard in recent memory! "Milkman" b/w "Faceblind" is available in a limited edition of 500 flat, circular vinyl discs. One-hundred-and-fifty of these were pressed to blue vinyl and only three of those remained as of a week ago; the balance of the pressing is on black media. We recommend pre-ordering the new single now via the Bandcamp embed below, as the band's need to continually repress old records should be ample evidence that more and more people are in on this great, perhaps not-so-secret, Tennessee secret [Tennessecret? -- Ed.]. -- Edward Charlton

>> No-wave noiseniks Palberta returned earlier this month with more economical, tweaked tunes on a cassette split titled Special Worship, which features music from the equally madcap New England Patriots on the back side. When we last wrote about the Annandale-on-Hudson, New York-based threesome here in December, the prankster surprises and spooky songwriting on its creaky/jerky/perky debut collection My Pal Berta had successfully loosened at least a few screws in this reviewer's brain. Across five tracks on the new collection, Palberta delivers succinct blasts of wiry, squirming guitar, minimal drum textures and grungy, lo-fi bass. The great groove of "Store" -- a tune that echoes the taut, dry weirdness of Brooklyn-based punk-funk luminaries Ava Luna -- is interrupted in its last ten seconds by serrated guitar strums and high, menacing yelps that suggest a young child's new-found ability to sing with reckless abandon. A delightfully skewed cover of "Hot Cross Buns" takes the tune somewhere it's certainly never gone before. Skittering atop the wonderfully concise compositions are dueling female vocals, which almost seem to play out the roles of Freud's Ego and Id, respectfully. One voice is calm and collected, often evoking the cool, speak-sing street moves of Kim Gordon, while the other trades in bubbly shrieks that imbue the trio's music with much of its chaotic swagger. Palberta continues to tap into something rare with its music, and we recommend you keep an ear on what they are doing. Stream Special Worship via the embed below, and maybe consider buying it at the hilarious and awesome $1,000 minimum. -- Edward Charlton

>> It's not boring, and it's not nothing: it's the latest bit of pleasing downer-pop from Melbourne, Australia DIY pop outfit Bored Nothing, the nom de indie rock of one Fergus Miller. Titled "Why Were You Dancing With All Those Guys?," Mr. Miller's new slow-burner is a beautiful, rainy strummer, flush with delicate electric jangle. High-string whammy bar action floats low in the mix and lends the ballad just the right amount of lovesick tension. Handclap accents on the snare hits and perfect, brief guitar and organ leads say just enough without getting in the way. Additionally, on this track Miller's voice reminds this reviewer of Elliot Smith, but in an alternate universe where the famed singer-songwriter attempted to audition for Slumberland Records after hearing The Aislers Set. "Why Were You Dancing With All Those Guys?" comes in a limited edition of 30 lathe-cut 7" records (housed in sleeves that bear the likeness of cartoon antihero Bobby Hill), which we imagine must be sold out by now. Bored Nothing's Facebook and Bandcamp pages don't state definitively that the packages are all gone (they do state there will be no repress, and the song will never be made available as a download), so who knows. Orders come packaged with a shirt, sticker and letter that are all related to the tune, making the $40 Australian price tag a bit more understandable. Stream "Why Were You Dancing With All Those Guys?" via the embed below, and click through if you feel like trying your luck at getting what may be the very last piece of vinyl. We previously wrote about Bored Nothing here last July. -- Edward Charlton