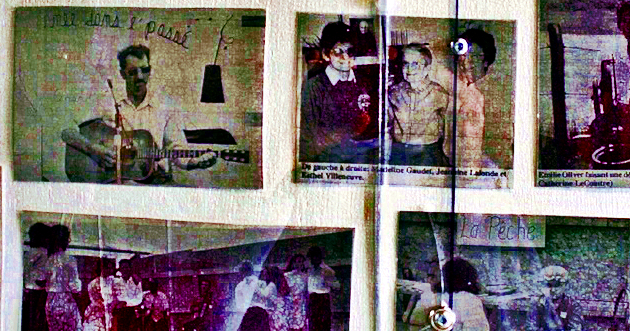 >> A year in the making, Fog Lake's terrific long-player Victoria Park arrived late last month, and it sounds like the cool morning before a stifling hot summer day. The release, the third long-player from the St. John, Newfoundland-based act, is informed by both a beautiful melancholy and an ungraspable yet quenching nostalgia. Fog Lake is centered around the songwriting of talented introvert Aaron Powell, whose music here drones and hums, presenting spectral voices and thrumming piano chords and more than a little mystery in a blurry but entrancing pastiche that recalls the dark wonders of Cat Power's "What Would The Community Think?," for example. Fog Lake began as a solo project for Mr. Powell about seven years ago. Historically, he has written and recorded alone, but this changed with Victoria Park, on which he was abetted on Victoria Park by the synth playing of Kenney Purchase on a few songs (Powell also relies on additional players when performing live). The collection is consistently enchanting, but points of interest include the relatively uptempo and anthemic "Antidote," whose drone is spangled by distant snare and Powell's reedy tenor. The highlight of Victoria Park is the absolutely haunting, poignant album closer "Dog Years," a mesmerizing video for which was released to the wilds of the Internerds earlier this week; we strongly recommend you watch that right here.Orchid Tapes released Victoria Park June 30 in a limited edition of 115 white cassette tapes; unsurprisingly, it is already sold out. Orchid Tapes was quick to bring to market a second edition of its other recent hit, Katie Dey's tremendous asdfasdf [review], so it is very likely a second edition of Victoria Park will materialize shortly. In the meantime, stream the entire, excellent release via the Bandcamp embed below.

>> Like Empire State noiseniks Palberta, New York City-spawned no-wavers The Sediment Club bring a refreshing, random logic to its DIY house-show squealing, traits that make the veteran trio's careening, desperate music the perfect summer spazz-rock cocktail to complement the season's scorching weather and bizarro political times. Lead single and title track "Psychosymplistic, Psychosymplastic" unravels the act's curious madness in grand, pounding fashion. The swooping, elastic bass, staticy noise-guitar and Austin Sley Julian's yelping vocals contribute equally to the tune's chaos. The result is an aggressive listen sans many of the typical trappings peculiar to aggressive punk music. Mr. Julian's intensity and the ridiculous lines of the chorus challenge listeners to consider what precipitated such a pleasingly ramshackle -- yet air-tight -- attack. How did The Sediment Club get to this? What's beyond life's random accidents and puzzling combinations of sound and action? Maybe, just maybe, that's all life really is, and The Sediment Club are here to soundtrack the gradual melting of all preconceived notions into a dense, modern soup. Psychosymplistic, Psychosymplastic will be released by Wharf Cat Records July 24 on limited edition LP, CD and digital download. The LP is available in an edition of 100 pieces with hand-screened sleeve art; the CD is packaged in a special clamshell case with fancy sticker and apparently noteworthy bar code? Pre-order any of the formats right here. The Sediment Club formed in 2008 and touts a formidable back catalog of LPs, EPs, tapes and singles, much of which appears to be listed at its web dojo; check it out. The band plays a house show in Boston at something called Scorched Ear tonight -- ask a punk for deets. Listen to "Psychosymplistic, Psychosymplastic" via the embed below. -- Edward Charlton

>> Brisbane, Australia four Blank Realm caught our ear recently with "River Of Longing," a kaleidoscopic guitar-pop number that does justice to antipodean nation's infamous psych-tapestry heritage. From its upcoming sophomore album Illegals In Heaven, due out via Fire Records on Sept. 4, the band showcases dynamic and colorful guitar melodies that dance around singer Daniel Spencer's tossed, playful vocals. The knowing, casual allure of Mr. Spencer's delivery brings to mind that of Canadians Kevin Drew and Brennan Canning of Broken Social Scene, the commonality being brutally earnest but inviting melodies. Speaking of melody, that is the name of the game for Blank Realm; at times the band seems to have so many ideas that they nearly overwhelm the comparatively simple chords and structures that underpin "River Of Longing." The song's opening guitar chime provides a sturdy foundation for song's big, wiry hooks, an opening salvo coated in warm delay and echo that not only recalls Johnny Marr's note-dense playing in The Smiths but also something a little more modern, like the halfway point between The Church and the sunny, synthesizer-driven style that usually comes with music that feels this bouncy, sexy and hopeful. Illegals In Heaven was available in your choice of black or limited pink-and-white vinyl, but the limited edition pink-and-white edition has already gone the way of the dodo bird, so, sorry. Pre-order the black vinyl, or the handy CD or digital download versions, direct from the Blank Realm Bandcamp right here. -- Edward Charlton