That Was The Show That Was: Infinity Girl, Lubec, Guillermo Sexo, Havania Whaal | Great Scott | 9 July 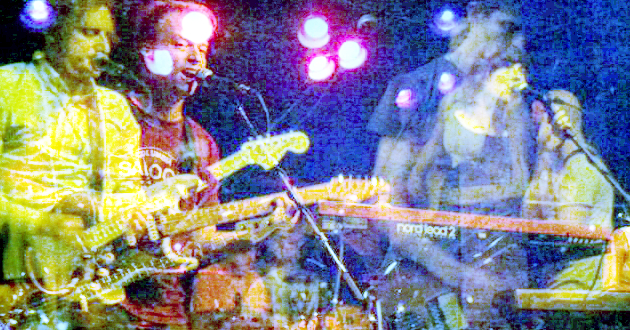 We're going to remember this one for a long time. Not only was this big, big, big rock show Thursday night our first-ever IRL meeting with a very old and good friend, it was also our first time seeing Clicky Clicky fave Lubec and now-Clicky Clicky fave Havania Whaal. Our good friends in Guillermo Sexo were reliably spectacular, and shoegaze heroes Infinity Girl were just heroic. Great show, five stars, would recommend seeing again.

But of course there's more to it than that. Openers and Oregonites Havania Whaal was probably the least-known quantity for most folks in Boston -- locale of the first night of HW's tour with BandFF's Lubec -- and a number of folks sidled up to us to remark at how the trio impressed. The band opted for more uptempo and immediate material for its live set, which somewhat played down the band's characteristic darkwave flavor, but revealed in aural glimpses some of the band's more classic influences in Versus and Unrest. Official Show Saviors Guillermo Sexo backlined the entire night with their gear, but perhaps bigger contribution was its amazing set, which was richly textured and firmly dreamy. The band's stock in trade is atmospheric and moody psych-rock, which we've written about here in these electronic pages for years, but even after a decade Guillero Sexo is finding new tricks up their collective and proverbial sleeve. Its set was heavily tilted toward brand-new material, and the second song out of the gate was a stunner, uplifting and transcendant in a way we have not yet heard the band do it. We are eager to hear what comes next; a video for the new-ish tune "Graffiti Skies" is about to be unleashed, so keep your eyes open for that.

Lubec was simply tremendous, a constantly crescendoing miracle of dream-pop, its three players and their playing both perfectly aligned and balanced. The Portland three has played with a second guitarist previously, and we were wondering if we'd miss that element in the mix, but fronter Eddie Charlton's guitar work, keyboardist Caroline Jackson's work holding down the low and and spangling the upper register, and Matt Dressen's sturdy drumming complement each other in a remarkably graceful way. Lubec played the three songs from its hotly anticipated "Concentration" single (which will be out on vinyl and cassette via Like Young and Touchy Feely, respectively) as well as hits from its 2014 masterpiece The Thrall [review]. Finally, Infinity Girl delivered a powerful reminder of just what got these guys signed to Topshelf Records earlier this year. Its dynamic set included classics including "Please Forget" as well as its latest single, but we were particularly thrilled to hear them play what will surely be a monster hit, the uptempo and blurry instant classic "Dirty Sun." Trust us: the song is massive, like Top 10 all-time-favorite-songs massive. Infinity Girl will be back in Boston in early September playing a release show with totes sick support for its tremendous sophomore set Harm, which will be issued by Topshelf Aug. 17 [details].

Lubec and Havania Whaal's tour jogged to the left for a show in Worcester, Mass. Friday and blazed through Brooklyn just this afternoon, and from here on out they are heading due south toward Jacksonville, playing dates en route with Clicky Clicky faves Golden Gurls and Swings. The remaining tour dates are posted at the bottom of this item. We suppose this is as good a place as any to note that Golden Gurls seem to be brushing off the cobwebs and becoming more active again. The Baltimore trio loosed to the wilds of the Internerds late last month a short stack of demos called, unsurprisingly, New Old Demos [link], and we have it on good authority the band has new material in the works, so keep an ear on Baltimore. Well, not all of Baltimore, pretty much just them and a few others, yeh?

Big thanks go to Carl, Jesse and Dan at Great Scott, as without their support there'd have been no show and that would have been super-sad. Now is probably an opportune time to mention that this Clicky Clicky Presents thing is sort of happening, and will continue to happen, and we're planning a bunch of first-rate rock events straight through into the new year, which year will include a certain blog's 10th anniversary, based on the most reliable metric of measuring such things. Anyway, keep your gaze trained on this page, our Facebook dojo and Twitter outpost. You'll be glad you did. Now why don't you go grab another beer and stream the songs below?