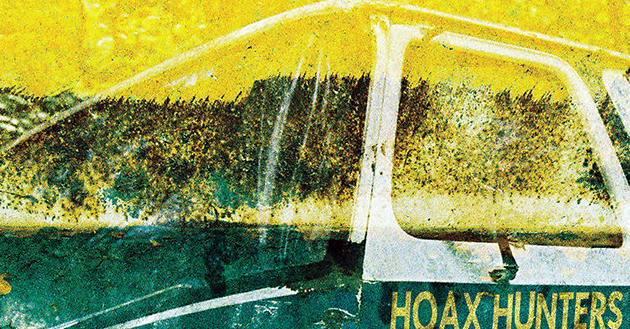 Richmond post-punk trio Hoax Hunters returns this week with a seven-song set of potent guitar music titled Clickbait, a collection stocked with lean arrangements, muscular rhythm playing and sumptuous guitar tone. The set was recorded in late July and early August at Richmond's Scott's Addition Sound, and six of the tracks were penned by fronter and guitarist (and noted photog) PJ Sykes. The centerpiece is the raging and breathless title track, a fiery and uptempo indictment -- thick with guitar distortion and marked by Mr. Sykes' incensed declamations -- that arrives at a spine-tingling, hard stop like a freight train plowing straight into the side of a mountain. While the EP is uniformly strong, it isn't all as ferocious. "Breakthrough" moderates the tempo, and Sykes reigns in his tenor for a more ruminative presentation, and the relatively -- relatively -- delicate "Transparency" ups both the restraint and the melodicism to deliver a tune fairly reminiscent of classic Versus. Clickbait cleverly closes with a recitation of the album credits during a song called "What Everybody Ought To Know About Clickbait," which, really, is an idea whose time has come, at least in the decontextualized digital music age.

We are pleased to be able to premiere for you today the aforementioned "Transparency," which you can stream via the Soundcloud embed at the foot of this item. The song is the closest thing to a ballad on the record, and the appealing high bend in the verse's guitar riff picks at the scab of a formidable nostalgia for things as sweet and timeless as Bettie Serveert's triumph Palomine or the aforementioned Versus' The Stars Are Insane. Cherub Records releases Clickbait as a digital download Friday via its Bandcamp page, where pre-orders are already being taken for five American dollars. 25 fans are able to purchase Clickbait bundled with a bumper sticker supporting an apparent 2016 presidential run by the EP and/or its title track, which, depending on your chosen political party, either is or describes your strongest candidate; those that pre-order Clickbait will also receive an unspecified bonus track. An online performance celebrating the short set is being planned, but in the meantime Sykes fêtes the EP with a solo set Thursday night at the fifth installment of Richmond venue Strange Matters' Locals Only series. Also on the bill are Among The Rocks & Roots, Lou Breeders and Antelope King, and full deets for the night are right here. We last wrote about Hoax Hunters here almost a year ago, on the occasion of the release of the band's terrific cover of The Dambuilders' "Smooth Control." Hoax Hunters' debut LP Comfort & Safety was released in August 2014 [review].