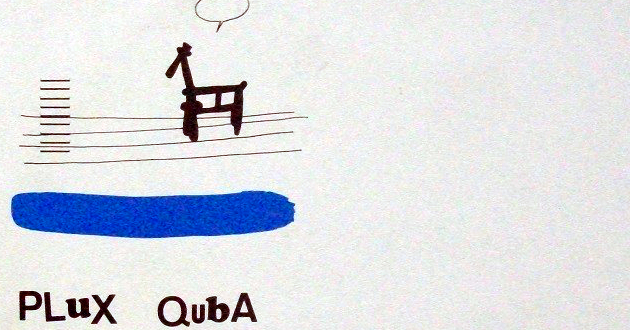 >> We've got a surprising number of items for you today that point back to the year 2007, which is odd, but there you have it (and, well, we dropped one from the lineup for tonight, but still...). We were very excited by Drag City's relatively low-key announcement via email 11 days ago of its pending reissue of Nuno Canavarro's mysterious and transcendent 1988 collection Plux Quba, which we last wrote about here eight years ago. The record was originally pressed on a small Portuguese label and reverently passed around among cognoscenti for years, which is how it was brought to the attention of experimental musician/producer Jim O'Rourke in the early '90s, who eventually reissued the dazzling, inscrutable collection on his own ("now limbo-ized") Moikai imprint in 1998. This, in turn, was how we first made the record's acquaintance, and every listen to the otherworldly collection has been a revelation. The Moikai pressing went out of print in 2005, according to Drag City (although Forced Exposure's web site indicates there was at least one re-press... in 2007), and so the label will reissue the set on vinyl and as a digital download on Nov. 20. Plux Quba is the sort of record where if we told you what it was like, it would make no sense, or you wouldn't believe that it was in the least appealing. In 2007, The Sea And Cake's Sam Prekop told Pitchfork he considers Mr. Canavarro's record "the high-water mark, in my opinion, of electronic music...It's a really delicate, beautiful, and really weird record." What's amazing is that this high-water mark in electronic music was largely created in a pre-digital world. It's really quite something. Set aside 27 minutes and click on the YouTube playlist below, as some hero has uploaded the record for everyone's enjoyment. Highly, highly recommended listening. And buying.

>> When we first became a fan of Texas shoegaze behemoths Ringo Deathstarr more than eight years ago, the wait for any new music seemed interminable. In retrospect, things weren't really that slow, but in recent years The Deathstarr has reliably turned out rock albums at regular intervals, with no drop-off in quality. We were jazzed to learn over the summer that the Austin-based trio led by Elliot Frazer is preparing the release of its fifth LP, a 12-song collection titled Pure Mood that is due next month. The album is being heralded by the dynamite preview track "Guilt," a three-minute tour de force that showcases the band's bludgeoning psych power and appreciation for rich ambient backdrops. The lead vocal is handled by bassist Alex Gehring, whose voice is deftly layered over itself, making it nearly as formidable a sonic force as Mr. Frazer's saturated guitars. While there is presently no domestic label announced, the venerable, London-based Club AC30 will release Pure Mood Nov. 20 as a 12" pressed to minty green- or lemonade yellow-speckled vinyl media or CD, and the set is available for pre-order right here. However, a trip over to the Club AC30 digital storefront just now indicates that the entire run of 500 LPs -- 250 in each color variety -- may already be sold out; they are listed as "out of stock," which we suppose leaves open the possibility that the threesome has some LPs on its collective person to sell at upcoming live dates. Ringo Deathstarr plays the Middle East Upstairs Oct. 18 on a terrific bill with Magic Shoppe and English luminaries The Membranes. Stream the aforementioned "Guilt" via the embed below. Club AC30 previously released Ringo Deathstarr's Mauve, Colour Trip and Sparkler LPs as well as certain EPs and singles; check out their entire offering right here.

>> Birmingham, England-based noise-pop titans Sunshine Frisbee Laserbeam and its associated acts are startlingly prolific, so we suppose it was only a matter of time before the band got around to release what it is calling an "acoustic record." But willowy, folksy balladry this is not. Instead, the quartet's recently issued Video Dreams, Vol. 1 rocks about as hard as fans would expect, if a little more weirdly. The nine-song set opens with the swinging "Cool Like A Haircut," which hews most closely to the classic SFL sound of any of the songs here. The tune's choppy guitar playing, treated with a crisp slap-back reverb, provides a jaunty counterpoint to the straight-forward drum beat. In its final minute, "Cool Like A Haircut" morphs, rising up off its tight groove and entering into an engaging ambient swirl that hints at the weird music that follows. Check out a video for the aforementioned "Cool Like A Haircut" right here. Additional highlights includes the title track, whose deconstructed, lo-fi reverie hangs its toes over the edge of a persistent haze of abused ride cymbal, murmured vocals and guitar drone, and the wacky instrumental "Ralph Visits A French Bakery," which sounds like the soundtrack to a hot interlude during an episode of "Ren & Stimpy." Video Dreams. Vol. 1 was self-released by the band Sept. 13; stream the entire set via the embed below, and click through to download the entire thing for any price. Sunshine Frisbee Laserbeam's prior full length was a self-titled collecton issued in 2013; in the interim it released a number of digital singles and EPs, all of which are available via Bandcamp right here. One band principal stated on his personal Facebook page in August that the act has a number of releases slated to come out, and it appears there may be something coming for Halloween, so fans should remain vigilant.