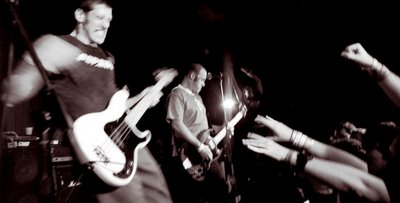 [PHOTO CREDIT] >> Pop-punk supergroup Armalite is playing a show. Doesn't sound too newsy, does it? But the band never plays, you see. So if you know what is good for you, get yourself to Philadelphia March 10 -- in the afternoon, no less. The band features Lifetime/Kid Dynamite guy Dan Yemin and Atom Goren of Atom And His Package/Fracture fame (not Fraction, R5 -- or is that a joke?). The Ratchets and The Ergs are also on the bill. Armalite released its self-titled debut on No Idea a year ago Wednesday and it was one of our eight favorite releases of 2006. How about some MP3s?

>> Struggling and increasingly musically irrelevant MTV Networks hopes to weaken YouTube's stranglehold on online video by distributing its content -- including these really cool things called music videos -- via its own web properties. The Viacom division disclosed the move in this Reuters story this afternoon, although few specifics are included. Content licensing discussions between Viacom and Google's YouTube recently fizzled, and unnamed analysts claim MTV's new plan is just vaporware aimed at giving it leverage in further negotiations.

>> Every once in a while we advise you to drop everything and check something out. This is one of those times. Check out one of the latest signings to Spoilt Victorian Child Records, Ringo Deathstarr. Do it. Do it.

>> This is worth passing along, even though it is old news. It was new to us, however, since we are really bad at reading our local alt weeklies. Anyway, for you Bostonites who don't know him personally: You know that really tall guy who is always at the shows you go to? Turns out The Boston Phoenix ran a whole article about him in October. And he's in a band called The Big Disappointments. And had we known that we would have stayed to watch him play Friday, as The Big Disappointments headlined that Darling Nerves show we saw. Thanks to BrighAAAAm for the link.
Posted by Unknown at 2/12/2007 09:36:00 PM