[UPDATED with a hosted MP3 that won't expire too quickly, album art and links to pre-order the album] Good things do come to those who wait. We had email today from some folks representing the interests of Fat Possum saying thanks for not posting any leaked tunes from the forthcoming Dinosaur Jr. reunion record that permeated the Internets yesterday. No problem, we said. Then they gave us permission to post the song "Been There All The Time" from the new record. And then we were psyched. The tune is an upbeat rocker with tons of shredding guitar, perhaps not as dark as the best Dinosaur Jr. stuff, but you gotta remember, this is music coming from a guy who recently wrote a CD of devotional jams about a living saint famous for hugging people. 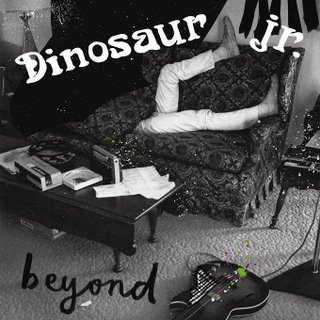 Anyway, "Been There All The Time" bears some resemblance to J's amazing cut "Same Day," which opened the first J Mascis And The Fog record More Light and heretofore has been in our opinion the best tune J has written this decade. The great news? There are many great songs on Beyond, and, to use a technical term here, the record has us completely stoked. Just wait until you hear the guitar solo on "We're Not Alone." But we're getting ahead of ourselves. The bad news? Beyond is still some 10 weeks off from being released May 1 on Fat Possum. Pre-order the record right here -- it may be the best Dinosaur record since Where You Been. What a day, huh? The only thing that'd make it better is if we could get some of the awesome silver Nike hi-tops J designed. Anyway, we know what you want, so here it is.

Dinosaur Jr. -- "Been There All The Time" -- Beyond [pre-order]
[Updated hard link -- thanks to a particular upstanding citizen]

Dinosaur Jr's cool and all, but this file you are posting is not even the final pressing of the disc. These tracks were leaked and are not original legit.
Shame on the record label for thinking you have legit Dino tunes.

Well, if you are right, then I guess the label's doing the smart thing by holding the final mixes for the actual release, no? Either way, the label knows what's out there, they said it was cool to post it, and I am grateful for it.

The link is dead for me.

Anonymous 1: Jay did indeed get permission from the label to post this track.