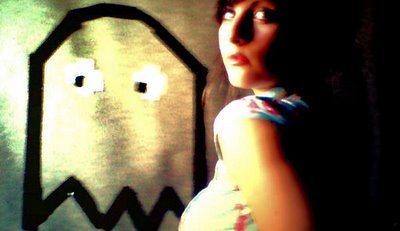 >> Until the unfortunate leak of the Dinosaur Jr. record this week, the newest music we were most excited about was from Birmingham, England trio Johnny Foreigner. Equal parts Built To Spill circa the gritty The Normal Years and energetic contemporary UK post-punk such as The Rakes, Johnny Foreigner crafts electrifying tunes that feel compact and sprawling at the same time. There are four tracks at the band's MySpace berth, and you can download all of them, which we highly recommend doing despite the fact that the tracks are ripped at a woefully low bitrate. We've swapped some emails with a fellow representing the band who hopes to get us some better-quality files, which we'll post if permitted. Currently Johnny Foreigner has but one single under its belt, but a new split single is to be issued next month on Sheffield-based Laundrette, complete with handmade 3-D artwork and 3-D glasses. In the meantime, the band is touring throughout the UK, and the dates are posted at MySpace. Check out these downloads below to hear what everyone else will be buzzing about several months from now. Well, it looks like you can no longer hotlink to MP3s at MySpace, which we guess is perfectly understandable, so just hit the links above and go get the files yerself.

[Update: OK, we're now fully obsessed with Johnny Foreigner. We just poked around and you can download five MP3s at their web site, and two MP3 samples of their first single "Sometimes In The Bullring"/"Camp Kelly Calm" (released in October) from the Laundrette site here -- and for those of you keeping score at home, yes, "Sometimes In the Bullring" does appear to be the same song as "Yes! You Talk Too Much" [oops, we think we mislabeled some files -- those songs are absofrably not the same song, we even had confirmation from the band]. OK, now we really should do something more productive with our Saturday than go deeper down the rabbit hole of fanaticism for this band... at least for now. But would a U.S. label please sign these guys ASAP?]

[UPDATE 2: We can't stop listening. We can't. Figures, as the band mentions Meneguar in their bio. They may be the only ones who like Meneguar more than we do.]

>> London's The Draytones have a shaggy British Invasion sound that, while not particularly innovative, moves us. The forthcoming single "Keep Loving Me," rides a lunging chord progression for several glorious, mop-topped minutes. You can stream the song at the trio's MySpace flat here. It features the vintage production move of hard-panned instrumentation, something The Beatles did often. So it's drums in the right earphone, guitars in the left and bass and vocals tussling between your ears. And then there's the backwards guitar tracking. "Keep Loving Me" is available for pre-order, and will be released Feb. 26 on 1965 Records in a vinyl edition limited to 1000 copies. 1965, for you indie purists, is related to Sony BMG in some manner. The Draytones are currently touring all about the UK, and you can find the tour dates at their aforementioned MySpace digs.

>> We stepped out last night with BrighAAAAm to see the latest project of one of the former members of fabled '80s indie act Phantom Tollbooth, and we liked what we heard: dueling vocals, big guitars, the occasional burst of math and kick-ass drumming. The newish act is called Darling Nerves, and they've got several tunes over at their MySpace diving bell here. We struggled last night for descriptors for the Brooklyn-based quartet, but we can say the band has a very engaging early '90s indie rock fuzz going on. We're certain there were dozens of band with a similar sound when we were in college, but we're hard-pressed to think of an appropriate analog. Magnapop? Tsunami? Bettie Serveert? None of those are quite right, although the latter circa Palomine may be the closest we get. Anyway, head over to their MySpace and check out in particular the standout track "Roy Orbison." It's gloriously melodic and the instruments and vocals are all over each other in a cool way. The band has two shows on the horizon, so check MySpace to see if they'll be near you.
Posted by Unknown at 2/10/2007 01:57:00 PM