Review: The Notwist | "On | Off The Record" DVD


Because little of what is now considered the blogosphere existed five years ago, it is almost understandable that there is little expression of any institutional memory of the quiet thunderbolt that was the release of The Notwist's sixth full-length, Neon Golden. The set was lauded by many as among the finest, if not the finest, of 2002. Junkmedia, for which we toiled at the time, called the set "a glimpse into the future of pop music." In so-called Internet time, however, 2002 was a few lifetimes ago. Since then countless bands have launched and lost or built and maintained staggering careers. Notable newcomers like Bloc Party have released two albums in the time it has taken The Notwist to -- well, pursue other projects and collaborations and even, in at least one case, start families.

The Notwist's long pause seems to have been too much for fans to bear. News we reported here in December that the Weilheim, Germany-based quartet is finally recording its seventh set met with silence on the blogosphere. The band's Wikipedia page doesn't even contain the news yet (by contrast, an acquaintance told us that the death of pop tart Anna Nicole Smith was added to her Wikipedia page within hours of her demise). The blogosphere, for what it's worth, would seem to be asking "Notwist who?" presuming it knew of them in the first place.

It is fortunate then that late last year "On | Off The Record," a documentary film chronicling the protracted creation of Neon Golden, was released on DVD. Even so, it is a documentary film in the same sense many of us probably first became aware of such things: as a narrow, almost academic, look at a somewhat esoteric thing -- in this case the writing and recording of an experimental electropop record. As such it is not a film you can casually recommend to your mother. But for an avid music fan, and particularly for fans of late period Notwist, the film is a bit of a Rosetta Stone. 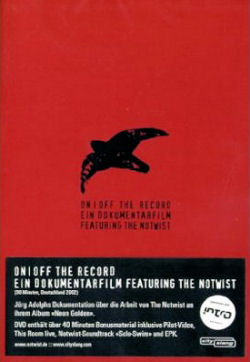 "On | Off The Record" engages in varied levels of scrutiny that mirror the deceptively complex song constructions on Neon Golden. It was culled from 120 hours of footage shot over 70 days during the 15 months that The Notwist gestated the set. The filmmakers are not afraid to focus on minutia, including the recording of extremely complex cello parts, contract deliberations and even some footage of the CDs being pressed. And somehow when taken together the different vignettes -- of reserved, small-town musicians doing phone interviews from behind a bar in a darkened pub, of two brothers intently listening to demos on a personal computer in a home-office, of pranksters shooting one another in the face with water pistols during a photo shoot -- transform like a Chuck Close portrait from discrete mosaic into a smooth picture of intelligent songwriters and arrangers pushing and embracing the boundaries of popular music.

Toward the end of the film Markus Acher expresses a sentiment that drove the making of the record, one that permeates both its production and the lyrics. "Nobody is allowed to makes mistakes anymore. Nobody wants these strange freaks any more. [But] I think it's important to have guys like that, where you don't always immediately understand everything they do."

The band's dogged attention to detail is the product of considerable focus on their craft. When an interviewer asks the Achers whether they have any hobbies outside of music, the query is met with puzzled silence. Then, Micha cautiously ventures, "Hobbies?" as if the idea is completely foreign. [To drive home the point, the film cuts to the brothers playing trumpet and drums respectively in a jazz ensemble on a platform outside a museum -- it is later disclosed that gigs such as that helped finance the marathon recording of Neon Golden]. It's a brilliantly understated bit of comedy, and it is not the only one. Later during a montage of the Acher brothers doing a series of 47 press interviews, the duo look at turns skeptical, bemused and bored with each successive question. And for the most part the Achers never say a word; they devote most of their energies to quietly quibbling over whose cup of coffee is whose and sitting uncomfortably weathering the barrage of questions.

Watching hired hand Sebastian Hess lay down the incredibly syncopated pizzicato cello track at the beginning of "One Step Inside," and witnessing the prior discussion of the virtual impossibility of actually being able to play it in time, is fascinating. It's what passes for drama in a documentary geared toward music nerds. Hess ends up having to record the track bar by bar and having it laced together in the computer. "It's a question of concentration," he says. "You can do it for three of four bars, but then you can't concentrate any more, and you're no longer fast enough." This, in essence, is what makes Neon Golden the landmark recording, state-of-the-art at the time, it was considered when it was released. In the age of Web 2.0 and ubiquitous music blogs, it is easy to forget the state of music only five years ago. To watch "On | Off The Record" is to watch a band realigning the parameters of pop music while, in their small way, making the impossible possible.

"On | Off The Record" trailer.
The recording of "Off The Rails."
Stream "Trashing Days" at the Domino USA site here.

[buy "On | Off The Record" from CitySlang here -- note that the DVD was supposedly region-coded "0," meaning the disc should play in any DVD player. However, our Sony DVD player would not play it, and as such we had to watch the disc on our laptop.]
Posted by Unknown at 2/19/2007 07:13:00 PM