Review: Not A Photograph | The Mission Of Burma Story [DVD] 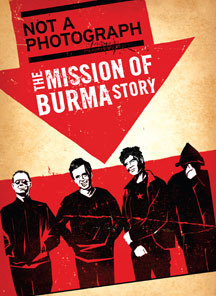 "Imagine if you could go back to something that was totally amazing 20 years ago and basically, it's not the same culturally, the world is completely different, but that thing is pretty much where you left it... I cannot think of too many opportunities in life where that happens," enthuses Fenway Records head and former Geffen A&R guy Mark Kates toward the end of "Not A Photograph," the Mission of Burma documentary issued late last month on DVD by MVD. That sense of awe and wonder regarding the reanimation of noise rock legends Burma several years ago permeates the indie star-studded film and giddily carries it aloft for most of the movie's 70-odd minutes.

If there is a problem with "Not A Photograph," it is that (through no fault of the filmmakers) there is no clean arc to the Mission Of Burma tale, and the film's opening and closing credits bookend what is an increasingly incomplete segment of the story. Mirroring somewhat the manner in which the band broke up too soon in its career (to soon for fans, anyway), the documentary stops short of portraying the band's protracted success recording and touring following the reunion shows (to whit, earlier this year Burma birthed its second post-posthumous set The Obliterati to critical raves, and the band has just announced several January shows). The film is hampered by its boundaries, featuring interviews that underscore the uncertainty of the future of a band that has since carpe diem'd with increasing aplomb. And so "Not A Photograph" must grapple with the question of how do you film a documentary about some reunion shows when in fact the story of Mission Of Burma in this decade is one of resumption. It's the narrative difference between raising a man from the dead and reanimating a caveman (well, three cavemen) from a glacier.

Even so, the film is an enjoyable document of a time of unbridled excitement within and about the band, capturing in one place vintage and reunion performances and never-before-seen rehearsals. The film's buoyancy has an inverse: toward the end of the film drummer Peter Prescott talks about how the members are uncomfortable with the critical and public adoration, "Deep down inside we feel like we don't deserve it." Mr. Prescott also confesses to being frustrated at the thought of returning to the relative anonymity of his other musical pursuits once the Burma reunion subsides. Fortunately for him and all of us, the juggernaut continues to roll.

"Not A Photograph" comes with copious bonus clips of the band in its early incarnation, live clips from various reunion shows and footage of the band tracking songs in the studio for its 2004 set onOFFon. The trailer to the documentary is embedded below, and here is a link to the original version of the trailer. Finally here is an MP3 and a link toward a second MP3 from Burma's most recent record.

[Buy "Not A Photograph" here]

Are you going to the Paradise show? We should meet-up if you are.

I shot you an email about this, J.