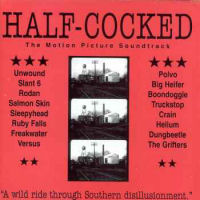 >> Whoah, we just learned that "Half-Cocked" is coming out on DVD in February. It is hard to talk about this film without first mentioning its amazing soundtrack, which features Versus, Unwound, The Grifters and hordes of other '90s luminaries. Anyway, this film screened at our small liberal arts college when it came out and all the indie fans dutifully turned out to see our favorite rockers immortalized in tasteful black and white celluloid. Honestly, we can't remember what the movie was about besides a lot of people in Louisville living together in a house and playing rock music. But just that sounds like a pretty awesome movie in and of itself. Fortunately, there's a handy synopsis online here, which reads in part:

"Shot on 16mm black and white film in 1994 in Louisville, Nashville and Chattanooga, Half-Cocked follows a group of kids who steal a van full of music equipment and pretend to be a band in order to stay on the road. The film documents the fertile southern underground rock scene in the mid 90’s. When the film was completed the filmmakers took the film on the road, showing it in rock clubs around the world from Berlin to Taipei."

Anyhoo, we're hoping a promo copy will come through the door sometime early in the new year so we can review it here, so keep your eyes open.

>> Norman, OK's resident psych-pop savants Evangelicals aim to complete a sophomore set The Evening Descends by February and release it by August, according to a MySpace bulletin from the band. The trio describes The Evening Descends as a "night record," which we guess makes sense, what with the title. Tunes expected to make the final cut include "Skeleton Man," "Midnight Vignette" and "Paperback Suicide." Evangelicals expect the new record will also see vinyl release. No word yet on which label is releasing the platter, but we'd guess Misra knows a great act when they hear one and will continue its relationship with the band. We saw Evangelicals play an invigorating set last month, and our review is here.

Oh yay! I've had the Half-Cocked soundtrack for ages, but have never seen the film, so good news about the DVD. Hope you enjoy very happy holidays, Jay!