That Was The Show That Was: Evangelicals 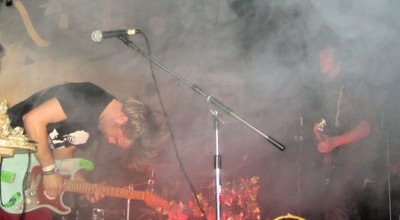 It is oversimplifying things to say that the difference between Evangelicals and the rest of the bands that you see in the middle of a bill on a Wednesday night at an established rock club in a major American city (besides the fact that Evangelicals are awesome), is that the band brings its own smoke machine. And red and green lights and piles of plastic flowers.

But let's not start there. Let's start with the fact that the touring Evangelicals are surprisingly heavy compared to the sounds captured on the band's pleasing debut So Gone, released on Misra in June [read our review here]. So Gone was recorded primarily by band leader Josh Jones, who incidentally and curiously wore only one sneaker for Wednesday night's performance. When performed live drummer Austin Stephens lifts the tunes from So Gone into a more dizzying sphere of psych-pop bliss. And bassist Kyle Davis lays down some particularly driving bottom-end. During "What An Actress Does Best" Mr. Davis tied Stephens' drumming and Jones' guitar work together in a manner similar to what Noel Redding did for The Jimi Hendrix Experience. And to top it off, more than once Davis was playing the bass and a synth at the same time, sometimes playing the latter with the headstock of the former.

Those who have heard So Gone know that Evangelicals have great material, but it was a pleasant surprise to see that the band also emphasizes showmanship. After a bit of fiddling to get a second vocal mic working for Mr. Jones, Evangelicals burst into an aggressive groove under cover of darkness, a groove that sounded like it would have been comfortable somewhere on side one of Smashing Pumpkins' amazing full-length debut Gish. We were shooting pictures so we weren't able to keep a set list, but we can report that eventually the band made its way around to playing "Another Day (And Yoor Still Knocked Out)" and "Here Comes Everything." The entire set was maybe a half-dozen tunes or so, as the band lost time to fixing the mic and occasionally kicking Jones' gamey amp into cooperating. Even so, the short, powerful set left us wanting more.

A general note about that night: Evangelicals were mid-bill support for blog dah-lings Annuals, whom we didn't stay to see. Given that Annuals had given away a lot of its record via blogs and received a coveted positive Pitchfork review this week, we suspected the club would be packed with indie youth. That wasn't the case -- we'd estimate T.T.'s was not half-full. Given the small crowd we saw down the block at the entrance to the Middle East Downstairs as we approached T.T.'s, and the report of All That She Surveys that the Amy Millan and Eric Bachmann show at Paradise was "undersold," we're guessing the big draw last night was Make Believe at the Middle East. So score one for those Kinsella dudes. We voted with our feet and feel like we saw the best band playing in Boston Wednesday night.

Evangelicals' tour runs through the first week of December, and we've posted the remaining dates below the requisite links and downloads. Make sure to check out the newish video for "Another Day (And Yoor Still Knocked Out)" at the very bottom of the item, too.

Superlative is right! Absolutely loved it.

Uh-oh. Evangelicals are in trouble when the world learns just what an utter trip they are to see. Those boys are crazy (in a very good way!!!).