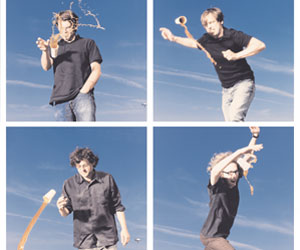 >> Did you know that a documentary was filmed about the making of revered German indie journeymen The Notwist's 2002 masterwork Neon Golden? It's true. An email promoting the release promises footage of "[e]ndless studio sessions, endless discussions with the record label and endless press interviews to promote the album." And you can watch the trailer right here. It features a lot of shots of the band's Acher brothers getting interviewed and speaking in German. As such we've got no idea what their saying. But the documentary, titled "On|Off The Record" and filmed over the course of 70 days by a chap named Joerg Adolph, was apparently issued Nov. 3. "On|Off The Record" is 90 minutes long and comes with English subtitles. According to the web site the DVD, which has a Region Code of "0" meaning the disc can allegedly be played in machines the world over, also includes Adolph's video for the album track "Pilot." Buy the disc here.

>> SwedesPlease here points us to streams of four new songs from former Concretes fronter Victoria Bergsmann. Her new project is called Taken By Trees and if the four tunes are any indication, its sound is skeletal and melancholy in a good way. Taken By Trees has a web site here and a MySpace lean-to here. News that Ms. Bergsmann left The Concretes in favor of pursuing a solo project was first reported in late July.

>> You ever wonder how much bands make when their music is used on prime-time TV? We've got some idea. A friend of ours in a band signed to a decades-old, mainstream indie had about 10-15 seconds of one of the songs on their latest album used in a prime-time teledrama earlier this month. Even though the bulk of the clip is trampled by dialog, my friend tells me his band got $20,000 for use of the tune. That's no small potatoes.

>> And finally, Cliptip here points to a very cool video for the ever-peppy Tokyo Police Club's "Nature Of The Experiment." The tune is from the band's recent release A Lesson In Crime. Check out the video here.