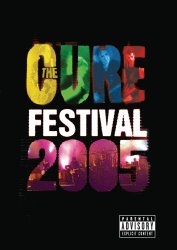 >> This one snuck up on us: veteran alternarockers The Cure today released a DVD called "Festival 2005" that captures the band performing live at, you guessed it, a handful of festivals last year. You may recall that for a short time in 2005 the band was performing as a trio, which in our opinion was the most exciting thing the band had done since 1992. Well, "Festival 2005" features The Cure as a quartet comprised of Robert Smith, Simon Gallup, Jason Cooper and the recently returned-to-the-fold Cure veteran Porl Thompson. The 155-minute DVD includes 30 songs, and you can watch the band tear through a raunchtastic version "Never Enough" at this link. In related news, The Cure has just disclosed it will headline the Ultra Music Festival in March. More details here and here.

>> Superlative Swedish indie mopers Logh have completed their forthcoming record and posted a new song sample to get us jazzed. The sample is for a tune called "Thieves In The Palace" and it is distinctly more rocking than the previously posted samples we discussed last month here. Anyway, the new record (title not public yet) will be released in March on Bad Taste records and it will have ten tracks. You can see the titles of the songs that made the cut at the Logh web site here, where you will also find the song samples in the "Audio" section.

>> The degree to which Pfork jocks The Hold Steady verges on embarassing, but even so the interview they are running today with band fronter Craig Finn is very good, and chock full of interesting information. Here are some things we didn't know: The Hold Steady's triumphant Separation Sunday only sold 20,0000 copies and this year's Boys And Girls In America sold that amount in three weeks; Finn works at digital music distributor The Orchard; he has never met his idol Paul Westerberg (of The Replacements). There is also discussion of Finn's writing process (with the priceless quote "...there's never a shortage of material. If we needed to write a song, we could probably go do it right now."), a mystery novel he has been pondering and working with Soul Asylum singer Dave Pirner (who sang the male part on "Chillout Tent," a song which, personally, we kind of abhor). Anyway, it is a very good interview. Read the whole thing here.

>> Pun Canoes reports here that Interpol has begun recording its third record. The band recently signed to Capitol Records, a label that has spent a fair amount of energy snapping up big indie acts The Decemberists and Lily Allen.