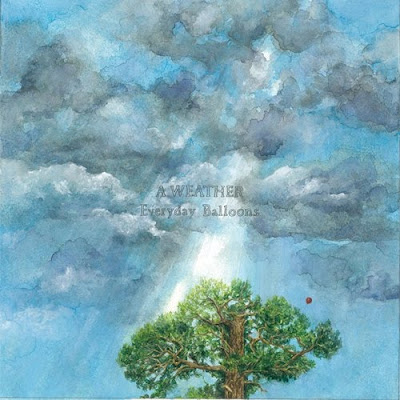 Perhaps the greatest challenge for thoughtful songwriters is to write compelling songs about relationships that don't bluntly reiterate the trite tropes of unrequited love, failed love or the teen ideal of infinite love. Yes, we know your baby done you wrong, up and left you, and/or won't text you back. But what about songs that address living in love, what people in relationships do to fill their days, ward off the doubt? Some songwriters can do it well, once in a while. Only the best songwriters can do it consistently and make those efforts sound effortless. Slow-core upstarts A Weather, led by singer and guitarist Aaron Gerber, did it across its entire 2008 debut record Cove. The set, which we named one of the best of the last decade here, is a quiet, beautiful and intense recitation of sweetly whispered secrets.

The Portland, Ore.-based quintet return this month with the charming Everyday Balloons. In contrast to its debut, the music on the new collection is relatively (relatively) cacaphonous. Gerber and his cohort -- while still nodding in the sonically disciplined direction of one-time tourmates The New Year and, on "Seven Blankets," to the long-gone Codeine -- have filled out the compositions on Everyday Balloons and expanded their dynamic range by deploying piano, more electric guitars and more assertive drumming. There is even (thrilling) guitar feedback in certain places. While the new collection is louder -- the album shudders to a close with the stirring climax of "Lay Me Down" -- it remains characteristically mesmerizing, paralleling the fevered state Gerber references in the exhilarating album opener "Third Of Life" ("and I thought I was hot stuff/but it's just that I was burning up...").

That said, the changes do alter the tone we had grown accustomed to from A Weather. The broader instrumentation and increased volume more fully illuminate on Everyday Balloons what was obscured in the dark corners of Cove. Beyond tone, the new set addresses broader themes with a sort of natural realism we associate with writers like Sherwood Anderson. Everyday Balloons focuses tightly on elevating the mundane and holding it up as a thing of beauty. Its songs limn in crisp detail quiet, unremarkable domestic moments and diurnal ephemera that in aggregate comprise a wide-eyed, brighter -- but still troubled and questioning -- outlook. The aforementioned "Third Of Life," in the midst of its observations about the fleeting nature of time, describes positioning a bed pillow, brushing teeth. The piano-led ballad "Midday Moon" sung by percussionist Sarah Winchester (whose enchanting vocals, we should note, provide counterpoint to Gerber's on nearly every A Weather track) begins with a rumination about cleaning a bathroom. The brilliant album closer "Lay Me Down" rides a melodic spiral of picked guitar and chimes, but makes time to analyze the act of "tucking back your hair/right behind your ear."

Email ThisBlogThis!Share to TwitterShare to FacebookShare to Pinterest
Labels: A Weather, Codeine, The New Year