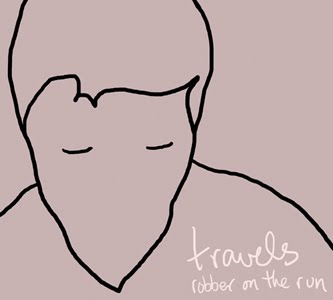 We were smitten with the band's sophomore set The Hot Summer, and in particular the swirling album cut "Buzzard's Bay," but seeing Travels live in October made us confirmed believers. That The Hot Summer and the Somerville, Mass.-based duo's forthcoming set Robber On The Run will both have been released in the springtime seems to do them a small disservice, as the duo's sparse, smoldering songs evoke not re-birth, but rather a beautiful stillness and decomposition that are distinctly autumnal. Seasonal anachronism aside, Travels' forthcoming third full-length Robber On The Run proves the band's continued success at creating spell-binding, if somewhat unsettling, records.

The music of guitarists/singers Anar Badalov and Mona Elliot manifests like dreams scrolling across the backs of eyelids in detached sheaves of varying psychic weights and densities. Drop the needle anywhere within Robber On The Run and one encounters melodic, meticulously architected songs that urgently whisper like the inner workings of a(n analogue) wrist watch. While drum machine renders the songs rhythmically stiff, the music breathes with the drift of layered guitars and vocals that hang suspended in the air like heavy smoke. The sum total is a ghostly record shot through with shimmering energy, from the solemn instrumental opener "Swimming" to the dazed, piano-studded but otherwise almost transparent rendering of the standard "My Funny Valentine." The relatively up-tempo "Burr Song" is an album highlight that foregrounds melodic feedback over prickly picked guitar and tidal piano, while the multiple layers of guitar in the otherwise understated rumination "Smile" add substantial weight to Mr. Badalov's vocals.