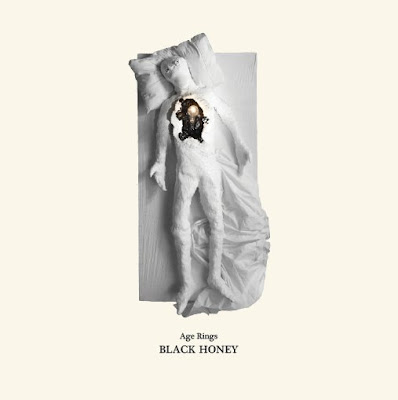 What about when you lose control of the Adam of your labors? Most everything you read on the Internet about Age Rings fronter and songwriter Ted Billings references his affinity for the work of writer Bret Easton Ellis, but we can't stop thinking about Mary Shelley and her most famous protagonist. If you've not had the privilege of undergraduate instruction in English Literature, then perhaps you're unfamiliar with analysis of "Frankenstein" implicating what it means to create, the relationship between creator and creation, and the ramifications of the former losing control of the latter. Which is what happened to Mr. Billings, who left Age Rings' ambitious monster abandoned and lifeless on a gurney for 18 of the 48 or so months it took to gestate the original, 20-song iteration of the feverishly vivid and ear-burningly beautiful Black Honey.

"When we started the first leg of the recording, we made the moronic decision to play the 'let's release an Internet single!' game. Twice. So any momentum we had was completely stunted by trying to finish (recording, mixing, mastering) a two-song single to try and catch a buzz or whatever. Idiotic, never again," vows Billings, whose bandmates include bass player Andrew McInnes, guitarist Will Spitz, keyboardist Alex Sepe, synth player Peter Baker and drummer Steve Sherwin. "And so when this totally didn't work, it was frustrating and extremely embarrassing. That, coupled with a pretty nasty bout with depression/self doubt, led me to scrap the entire thing. I guess absence makes the heart grow fonder, 'cause a year-and-a-half later, out of the blue, I started thinking about it again... and made the decision to finish it."

We don't have our notes from 20 years ago, and don't recall what would be the important parallels here between Shelley's creation and Mr. Billings' bout with Black Honey. But we wonder whether, between dreaming the plot and agreeing to put her name on the book for its second pressing, Shelley was wracked with the kind of doubt that precipitated Billings walking away from Black Honey for a year-and-a-half. Thankfully, after devoting four years and at least a few thousand dollars of fan donations to finishing the follow up to Age Rings' acclaimed 2006 debut Look... The Dust Is Growing, a double-disc version of Black Honey was self-released May 21. Fortunately for us the record is getting another jolt across the bolts, because we don't know that we ever would have heard Age Rings' astonishing amalgamation of roots grooves, pop hooks and noisy interjections had Midriff Records' top brass not put it in our hands. Which is sort of the point of the Boston label's new, leaner, 14-song version of the record.

"It's like the 'if a tree falls in the woods, but no one hears, did it ever even fall'-type thing," Billings explains.

Midriff's new formulation of Black Honey isn't abridged so much as it is re-imagined and re-sequenced.

"There are little chunks that are in the same order, but the feel of it is definitely different," Billings says. "I actually really like listening to it this way. The interesting thing to me, as a listener, and having lived with this thing for so long, is that you can sort of start anywhere. I spent a long time thinking about how the [two-disc version] would play out. Like a long, long time. But now, listening to it pared down like this, I feel foolish for doing so."

In the final analysis it is likely time well-spent: Black Honey is one of the very best records of 2011. Even so, it's hard to envision a version of the record that doesn't begin with the amusingly self-defeating "Rock And Roll Is Dead" and end with the paralyzingly affecting "Caught Up In The Sound." The former tune bursts open with volleys of discordant notes before charting a verse with a melody that doesn't quite resolve. The chorus establishes a blissfully noisy center amid handclaps and a bed of what sounds like low brass. This one song is so perfectly realized that you start to understand where the months and years went while Age Rings was making the record. But there's still a lot of record to go, and it is all equally as brilliant. Album closer "Caught Up In The Sound" is perhaps Black Honey's biggest treasure. The tune touts a momentum and inevitability -- underlined by the fact that the verses and choruses drone into eachother -- that renders the love-stung vocal even more poignant. It's a devastating final track; it's a huge artistic achievement.

Remarkable moments appear at every turn in Black Honey: the brilliant swerve of the tape slowing the final moments of "Ender" through various keys only to resolve into a slow groove for the final minute; the twisting slur of the lyric "I smoke Parliament menthols /watch Headbangers Ball" in the opening number; the unhinged falsetto at the tail end of "Big Black Hole." The collection can also be vibrantly lucid, particularly the understated and downbeat travelogue "Ups And Downs" that features Gibbardian narration about bad times like "a crowd gathered outside when I got kicked out of The Middle East, I left my car and called a cab, told the driver 'Quincy.'" "Head Up High" has an undeniable chorus studded with a bright piano melody that will never leave you.

Midriff releases its concise Black Honey this Saturday, and Age Rings supports the release with a show the same night at Radio in Somerville, MA, with dreamy standouts Guillermo Sexo supporting. Marconi and The Future Everybodys will also perform. Age Rings is already looking to the future; the band will begin recording a third record tentatively titled Magnum Love in January at Watch City Studios in Waltham, MA, the same studio where Black Honey was tracked.

Rock and Roll Is Dead by Age Rings