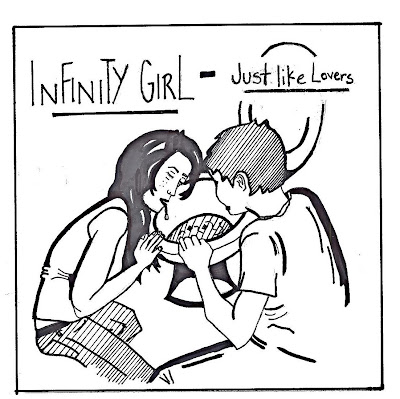 [UPDATED] Boston shoegaze behemoth Infinity Girl with its latest EP of cacaphonous dream pop puts a big exclamation point on a break-out year for the quartet. It's easy to forget that a year ago the band was just getting off the ground, and as recently as seven months ago few even knew who these guys were. But with the unexpected materialization of its brilliant full-length debut Stop Being On My Side last spring, Infinity Girl began a meteoric rise into the vanguard of the city's guitar bands. Just Like Lovers, given the relatively short time it germinated and how closely it comes in the wake of that long-player (although most if not all of its songs are already live staples), is a surprisingly large and well-defined step forward for Infinity Girl, one that suggests the band may only be beginning to tap a great potential.

Opener "Untitled (July)" commences with a My Bloody Valentine-esque swirl of guitars and a stuttering beat. Lush, effected guitars drape over everything, burying the drum kit and threatening to levitate up off the rhythm tracks altogether as they sensuously shift across one another like layers of diaphanous tulle. "Taking Nothing" touts gentle vocals that recall Brooklyn's late, great Dirty On Purpose, but the most compelling aspect of the tune is the crushing loud-quiet dynamics that move drummer Sebastian Modak's steady work behind the kit to the fore as he powers tidal waves of drop-tuned guitars spangled by guitarist Kyle Oppenheimer's helical leads. EP closer "Not My Hang," featuring what we believe to be the first recorded lead vocal by Mr. Oppenheimer, is blurry, bending and beautiful, and perhaps I-Girl's most sophisticated composition to date. The song's final moments when rendered live are cataclysmic; the mayhem is necessarily reigned in on the recorded version to non-ear-bleeding levels, but nonetheless is both quite affecting and a suitable end to a collection of songs.

Like the first Ringo Deathstarr EP, Just Like Lovers is so very enjoyable and brief you will just play the thing over and over, until the songs just play over and over in your head. Just Like Lovers captures the sound of Infinity Girl reaching farther, with more crystalline production highlighting arrays of guitars deftly arranged around soft or spectral vocals. With the impressive progress the band has logged in such a short period, fans can only hope that its development won't be arrested by the temporary departure of Mr. Modak, who will be out of the drum stool for much of 2013 while he pursues other interests. Infinity Girl self-releases Just Like Lovers tomorrow; our friends at WFNX.com premiered it in its entirety earlier this evening. The EP is being feted tomorrow night with a killer show at TT The Bear's that includes sets from the mighty Soccer Mom, Speedy Ortiz and The New Highway Hymnal; all the details are at the Facebook event page right here.