No, Thank YOU: Exploding In Sound Commemorates Protracted Awesomeness With Long Weekend Of Shows In Boston, That Other Place 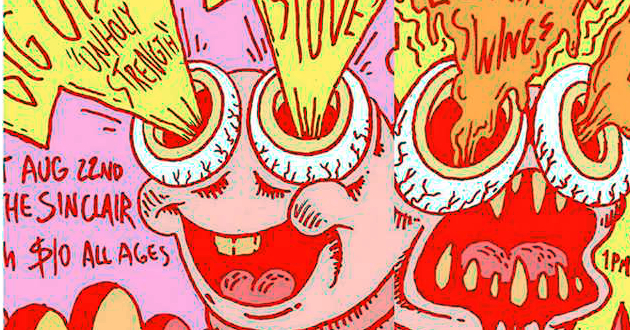 Anyone with a passing interest in this publication probably has some understanding as to the awesome might of Brooklyn's Exploding In Sound Records. Originally a Boston-based concern, the Empire State label powerhouse is home to arguably the greatest active roster in indie rock, a kudo likely to be burnished further by the recent signings of DC's elastic slowcore trio Swings and extremely curious New York indie four Palm. History lessons aside, the folks over at EIS do it good, and they do it righteously, which is definitely something worth celebrating. And what better way to do so than with a long weekend of shit-hot rock shows across two states, a couple cities and a half-dozen venues? To sweeten the deal, said rock shows are not only highlighting the formidable EIS stable, but also bring under the big tent certain extended and notable family and friends. The festivities are already underway this evening at Baby's All Right in Brooklyn, with the traveling circus not hitting Boston until Saturday. Below we look under the hood of those local bills, running down the sights and sounds of what's being called The Exploding In Sound Presents: "Thank You For Being A Friend" Extended Weekend. So read the good news and spread it wide, readers.

The first night of the Boston leg of the extended weekend takes place at what we believe is the biggest venue in the series, Harvard Square's opulent The Sinclair. Although our proposed review got somewhat lost in the shuffle of paperwork, music work, and real work, Palehound’s stunning debut LP Dry Food may very well be Boston's record of the year. An eight-song collection of inventive lyrical, and musical twists and turns, Ellen Kempner and co.'s work stands strong among her labelmates and neighbors, and -- as proven by last Sunday’s opening slot at the Royale -- Palehound proves to be an increasingly formidable live act as well, and we expect their time on stage Saturday will be particularly memorable. Also playing the big, big rock show Saturday is Steve Hartlett’s post-Ovlov (RIP) project Stove, which we gathered last time they were in town also includes other members, both former or otherwise, from hit-makers like Ovlov (duh), Sneeze, Bedroom Eyes, Kal Marks, and Big Mess. We promise we will die happy the day we get to see Stove play the Lemonheads classic "Stove" live, so, you know, keep an eye on us. New Yorkers LVL UP and Big Ups are also on the agenda for Saturday, and both groups have wowed us in the past with their live presentments. Clicky Clicky faves Krill plays last, most likely to little or no fanfare wink wink nudge nudge. Tickets and other info can be found right here.

Sunday's slate on the far side of the river features not one, but two stacked rock shows in Allston at two of the city's most popular rock halls. The afternoon plays host to an eclectic bill featuring the talents of some out-of-town friends, some city-bred rising talent, and some new-comers to the fold. Vundabar's set is sure to stand out, as its recently self-released sophomore LP Gawk is chock-full of weird, slippery instrumental turns and expertly crafted phrases. The record is a huge leap beyond their still-pretty-great debut Antics. Other performers toiling in the daylight hours include local noisy rock outfit Lady Bones, formerly local heirs to Boston's shoegaze throne Coaches (whose likely forthcoming EP is like whoa, and whose drum stool for the afternoon we believe will be occupied by Infinity Girl's Sebastian Modak), New Yorkers Washer and Zula, Chicago-based math-punks Great Deceivers and the aforementioned jazzy DC slowcore heroes Swings. We’re given to understand there will be free pizza for those who show early. We repeat: FREE PIZZA. As if all the great rock sounds we’re enough incentive to roll out of bed around noon. Tickets and other info can be found right here.

The finale of Sunday's double-header marks what we believe is the Boston debut of New York's Leapling, whose EIS debut Vacant Page caught the attention of our own Edward Charlton a ways back. The set presented a breezier, reverb-ier affair than we're generally used to from the Exploding camp, and yet another winner in a year full of unreasonably great records from the label. It is one that most definitely has us primed for a proper introduction to the indie pop group. Sunday night also boasts the talents of Nashville math-rock duo Gnarwhal and long-running Northampton fuzz-rock crew Bunny's A Swine. Eternal Clicky Clicky faves Kal Marks (!!!!!!!!!!) and the kings of the Boston underground Pile will bat cleanup at the joint, which presumably will be the final gig ever to take place at America's Living Room (a/k/a Great Scott) after the stage inevitably succumbs to all the heavy rock power. Tickets and other info can be found here. -- Dillon Riley