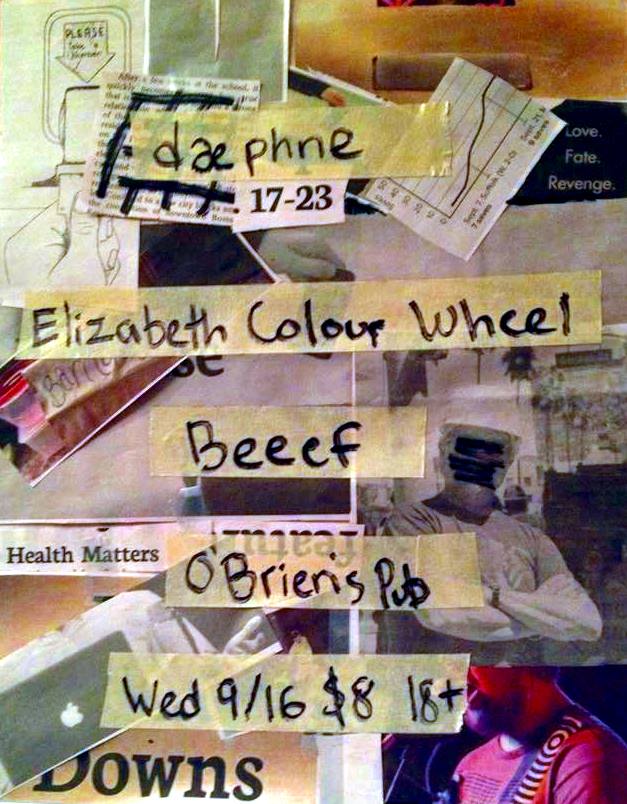 In case you've not yet heard, yr friends at Clicky Clicky are putting on some rock shows in glamorous Allston Rock City™ this fall and into the new year. The first is tomorrow night, when rock fans who assemble at O'Brien's Pub can catch an evening of now sounds from jangle-mongers Beeef, stormy shoegazers Elizabeth Colour Wheel, and the pensive dream-pop purveyors Dæphne.

Beeef, a new-ish act that counts among its number journalist Perry Eaton (Allston Pudding, Boston.com), released unto the Interwebs last spring a strong, eponymous EP that paired irrefutably catchy surf-styled guitar licks with Mr. Eaton's lively paeans to Boston living. While all four numbers on Beeef are winners, the one jam to rule them all is "Dogshit Paradise." Here the band steers an efficient and sturdy bass line through an extended workout as Eaton waxes on the mundanity of morning commutes and dirty student domiciles.

Attentive readers will recall our previously spreading the good news far and wide about Elizabeth Colour Wheel, and not just because their name totes references blog forever faves Lilys. There was this piece, and then there was this piece; good times. Having seen the quintet rock basements and Berklee parties within and without Allston, we can confirm that its live set can be transcendent, and so we are pleased to also have Elizabeth Colour Wheel on the bill tomorrow.

As with ECW, we dubbed Dæphne a Boston band to watch based purely on the strength of a formidable four-track demo, this one surfacing late last year. We went so far as to deem their tune "Driving Down a Country Highway Blasting Weezer" one of the best of 2014. Dæphne is hatching plans to ditch the best coast for a life anew out west and we will wish them great success in their future endeavors when the time comes. But in the meantime there is rock to be rocked (not to mention, apparently, a debut LP to release), and we are pleased to host the quartet for what may or may not amount to one of its last gigs in town.

There might be an additional detail or two at this Facebook event page, but that is largely the size of it. We beseech you to come early tomorrow, maybe enjoy a beer or two if you so choose, and then of course stay late. In that exact order. Also bring earplugs. If you've not yet memorized the three EPs referenced supra, we have embedded them below for your listening pleasure. -- Dillon Riley