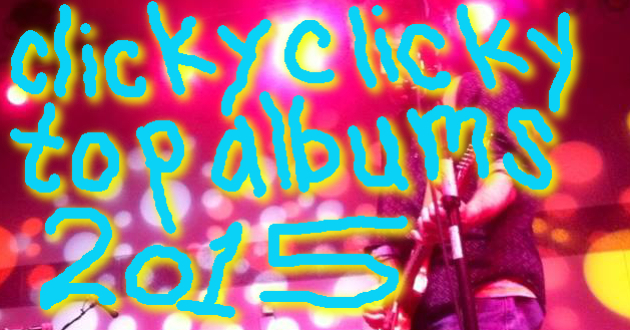 Well, here we are at the end of a terrific year in music. Seriously -- not a lot of haters hatin' right now, are there? Not that we ever countenance such nonsense. Our annual refrain is that if you didn't hear any new music that knocked your socks off in a given year, that's on you (to paraphrase Mr. Lydon). 2016 doesn't look like it will disappoint, either. Below we name 10 albums from this year that we deem indispensable. But first a brief aside: one meaningful measure of just how excellent a year it was for music is to take stock of those records that fell just short of making our list. Ten acts whose terrific records and extended plays rated very high at Clicky Clicky HQ, but which ultimately didn't garner a slot, are All Dogs, Courtney Barnett, William Basinski, Beach Slang, Bedroom Eyes, Bully, Coaches, Palehound and BandFFs Speedy Ortiz, and Thin Lips. With that as context, our 10 favorites, the anointed ones, are listed and linked below. Before you dive in, we'd like to offer sincere thanks to you and all of our readers for whiling away the hours in our electronic pages this year. And special thanks to writers Edward Charlton and Dillon Riley, champions each, who help move Clicky Clicky forward year in and year out -- thanks doods. See you all in 2016.

We often return to Carrie Brownstein's quote in this 2011 interview, in which she says "'The reason [a given band is] not The Clash is not necessarily because they're not The Clash, but because I don't need them as much as I needed Joe Strummer in 1990.' The way you need and relate to music changes." And we bring that up now because one of the primary reasons we love Funeral Advantage's flawless debut long-player Body Is Dead is that it was exactly what we needed during a particularly stressful time. This is not to discount the understated beauty that permeates every song of the record; indeed, we applauded a number of the songs from Body Is Dead here and here as the summer days waned. Body Is Dead hits an aural sweet spot first charted by New Order and then idly circled by M83. The record has an internal consistency, terrific pacing, very appealing melodies, and significant emotional weight, all of which make it the kind of record you can listen to on repeat for hours on end. Which we did.

We lived with Harm for so long before it came out that (true story) we jokingly threatened one of the band members when we learned that the album running order we had grown accustomed to would not be the running order of the commercial release. Infinity Girl from its earliest days has consistently made the kind of music to which Clicky Clicky readily and strongly bonds, and Harm is no exception. This is evidenced in part by our selection of the banger "Dirty Sun" as our top song of 2015, but the fact is Harm is so much more than that song. Every tune pulls its weight, and as a set Harm highlights the increased influence on the band of both post-punk sounds and the stronger role of lead guitarist Kyle Oppenheimer as a songwriter. The record is darker and harder than prior efforts, something its title suggests, but it is also Infinity Girl's strongest collection song for song, which renders it indispensable. We're very excited to hear what the foursome does next.

We came across an adjective at some point earlier this year and grew very excited, because 1) we are nerds and 2) we realized it fit into a single word a sentiment that we usually expended many more to describe. The word is "uncompromising," and while many of our favorite records could be described as such, among our favorite albums of 2015 the descriptor best suits Spectres' dark and dense triumph Dying. The record is rife with squalling, brawling guitars that scrape against the stereo field, and the band's wanton and hedonistic embrace of noise is refreshing. But as is characteristic of the key proponents of the approach -- and we're thinking of Sonic Youth here -- it is Spectres' deft control of same that makes its music so thrilling. Dying is tidy when it needs to be, and arty when it wants to be, but never strays so far from the music's psych-blues foundation as to lose focus. The sinister record's seething and brooding so very potent, the cacophony so euphoric, and all of the above makes Dying among the best records of 2015.

It's hard to write about this record without a sense of disappointment; not because the promise of Krill was unfulfilled, but because fronter Jonah Furman's inward exploration was among the most meaningful exercises in indie rock; how and whether it will continue still seems undetermined (although Mr. Furman has been playing solo shows in recent months). Instead of viewing it through the lens of the threesome's dissolution, it is fairer to consider A Distant Fist Unclenching a rock record, and in that context it is very easy to celebrate, as guitarist Aaron Ratoff's imaginative arrays of notes and incisive chordal assaults, Mr. Furman's elastic and curious bass playing and Ian Becker's drumming make the trio's ensemble playing incredibly exciting. And with such terrific songs with which to work out its weirdness, A Distant Fist Unclenching is both gratifying and unstoppable. Sure, that the band perceived no next logical step beyond this one is sad. But there is something thrilling in the band's willingness to walk away without diluting its power one iota. A Distant Fist Unclenching is the straight dope.

Haunting and heartbroken, Fog Lake's wondrous Victoria Park feels like standing on the shore and watching helplessly as a ship inexorably sinks below the surface. The vivid yet nostalgic long-player is the handiwork of a one-man chamber-pop project helmed by St. John's, Newfoundland's Aaron Powell. Built up from somewhat androgynous vocals, sturdy piano chords, and sweeping drones that spread across the stereo field like plush carpet, the set is wistful and dreamy and endlessly listenable. And while Orchid Tapes had an incredible year (remember that Katie Dey record?), we'd be hard pressed to rate one of its other releases higher than Fog Lake's textural and engaging tour de force.

The music of Stove so closely resembles the music we came of age with (Dinosaur Jr., Lemonheads) that we are helpless not to love it. Not that it doesn't have its own arresting personality (by which we mean mastermind Steve Harlett's personality), but even Mr. Harlett's wry and dry wit echoes that of legendary losercore proponent Lou Barlow. Even so, ultimately it is the incredible songs that kept this album in heavy, heavy rotation as soon as Is Stupider was released: not the least of which is the yearning "Wet Food," which is about as perfect a song as any guitar band released in 2015. And maybe 2014, too. Is Stupider keeps on giving, all the way across its 40 minutes. Let it.

Hop Along's titanic sophomore set is vivid and electric, filled with spiky guitar work that colors the jagged emotions pronounced by fronter Frances Quinlan, the most captivating singer in indie rock right now. On this record the band introduces as second guitarist former Algernon Cadwallader dude Joe Reinhart (whose label Hot Green issued the first Hop Along LP), and his playing applies crucial new dimensions to Ms. Quinlan and company's music. We turned on to the record later in the year than we should have, and the more we listen the more we believe it should rate even higher on our year-end list. Painted Shut is truly special, endlessly listenable, and a sure sign that Hop Along is making epochal music.

As with Stove's LP mentioned supra, we are extraordinarily predisposed to like this record because of the big guitars and big melodies. It doesn't hurt that this band ALSO includes former members of the mighty Algernon Cadwallader, also mentioned above. Dogs On Acid is a guitar-pop record of the first order, just terrific songwriting that is gracious with the melodies but respectful of the listener's smarts. Big primary color melodies are painted over swinging rhythms and sparkling and imaginative guitar playing, and these conspire to take what at its base is pop-punk music and elevate it to an art form. Perhaps more than any of the other releases on our list, this record is just flat-out and universally enjoyable, the kind of thing you could put in the tape deck of your parents' car with little fear of repercussions. Maybe? Change your life.

Otherworldly, thoughtful and textured, Captain Of None overflows with an optimistic belief in the transformative power of music. The set marries mastermind Cécile Schott's adherence to electroacoustics with her deep-rooted love for dub reggae. And while the pairing might seem like a stretch, there is nothing about the mysteriously beautiful Captain Of None that feels forced or anxious. Fluid looping, pensive vocals, and patient pacing make the set the most meditative of all of our year-end favorites. We were delighted to see a follow-up was initially coming along relatively quickly, and although Ms. Schott recently shared that she has had a difficult year that slowed her process on her planned new collection, its seems a new set will be along before too long. Even so, we've still got plenty of dreams to dream along to Captain Of None before we get antsy for new sounds. Highly recommended.

The marvelous and impressionistic slowcore of the D.C.-based unit Swings is terrifically appealing; it trades in impressively controlled dynamics, rhythms that fluidly flex and contract, and slippery, indeterminate vocals that provide a foil for both. The band's sophomore set Sugarwater feels especially confident, given the performers' relative youth. There is no casting about, no stylistic shots in the dark that indicate Swings yet questions its artful approach to subdued post-punk. The confidence also manifests in nifty production choices, like the autotune on the vocals on the standout preview track "Tiles," or the delicious shell resonance on the snare drum in "Blood On Seersucker," whose title belies the carefree moments provided in the tune's verses. It is not terribly often we encounter a band so young yet so smart, and Sugarwater is all the better because of Swings' fresh approach to songwriting.