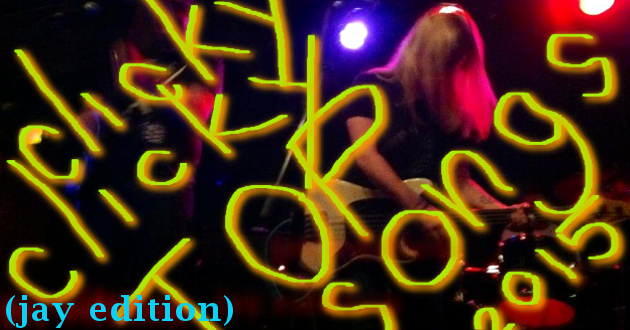 2015 was surely an incredible year for music, with each week delivering exciting new sounds from all corners. Clicky Clicky devoted most of its electronic column inches to acts hailing from the U.S. (and particularly our hometown of Boston) and the U.K., but also featured acts from Australia, France and Portugal, and probably other places we're forgetting. This year, favorite songs were a little more difficult to select than over the past decade that we've been doing this, in part because of the vast amount of great things to choose from (how is there not a Beach Slang or Stove song on this list? Shit is competitive, yo...), and also because we spent a lot of time seeking out records that don't necessarily reveal themselves all at once, records that establish and maintain their own peculiar universe of meaning. Even so, it is most often the case that our favorites immediately rise to the top, and that's true of more than half of the songs below. Some of our favorite records were sleepers, and some songs they contained were more insidious in their efforts to dominate our consciousness and subconscious.

So while the Infinity Girl track below was immediately addicting and we've listened to it scores of times, the Colleen track and others like it snuck up on us, suddenly and surprisingly dropping into our brain out of our mouth during a quiet dog walk or long commutes in the car. No matter how they got there, all 10 songs listed below are a part of us now, and we'll always associate them with 2015. We hope you enjoy them as much as we do. Keep an eye open for our year-end albums list, which will be along sometime in the run-up to Christmas, but in the meantime we invite you to rock out to Clicky Clicky Music Blog's Top Songs of 2015: Jay Edition, either a la carte via the individual embeds below, or via this both handy and dandy Sporkify playlist (which sadly but necessarily omits the cracking Hard Left track, which is presently unavailable via the service). We salute the bands below, and we thank you, dear reader, for passing the year with us. There's a lot coming up from Clicky Clicky in 2016, so remain vigilant.

"Dirty Sun" emerges from noise and feedback and then swells into shape on the back of Mitch Stewart's driving bass melody, which is truly the secret sauce of this, Infinity Girl's most potent pop moment since the towering "Please Forget" that featured on the band's 2012 debut Stop Being On My Side. "Dirty Sun" is even more vibrant, its crackling pace providing an irresistible pull that never betrays the listener. The Brooklyn foursome's characteristically colossal guitars and fronter Nolan Eley's cool vocal acquit themselves wonderfully, and it is the latter that supplies the strongest, if most understated, hook. Mr. Eley's narrative of a love going off the rails effectively captures the teetering feeling where romance goes from intoxicating to irreparable. That the band can make it all sound so arresting is a testament to the pop smarts that help make Infinity Girl one of today's most exciting indie acts.

It's soothing and fantastic, and appointed with glistening guitars. It's dense but light, basks in airy reverbs and touts curiously affecting robot-voiced verses. It's "Gardensong," and it stands out like a crown jewel even on one of the year's standout records, the Boston dream-pop heroes' debut long-player. Fronter Tyler Kershaw's vocals are heavily veiled within the song's dreamy, trance-like state, but enough of them bob above the steady waves of crystalline, delayed guitars and the surprisingly crispy beat to indicate affairs of the heart are at issue. A glance at the lyrics reveals lovers at an impasse, a place where the thing that they both want is not the right thing. The still sweetness of that resignation is nearly as fetching as the song's melody, which is gently arrayed along layered guitars and bass whose sounds seem to stretch to a sunny horizon, despite Mr. Kershaw's downcast lyrics.

Love can bring you down, but "Let The Bombs Off" feels like a celebration, despite the desperate times conveyed in its lyrics. Perhaps we can attribute that to the singular imaginary Philadelphia that exists in our head and heart; collectively, the city's indie rockers seem to have historically colored their lovelorn sentiments with a certain determination to live on -- it's just part and parcel of the city's DNA. Indeed, on "Let The Bombs Fall Off" Dogs On Acid fronter Peter Helmis (ex-Algernon Cadwalader) sings of wishing he was a widow ("'cause then I'd know that you're not coming back") and crashing his dream car ("just to see you shake"), but with a delivery that is more determined that dour. The song's chugging rhythm, deliciously chunky bass and bright guitar work don't take a backseat to the vocals, however. The splashes of bending guitar in the chorus recall the heyday of the absolutely brilliant Meneguar, but truly every second of the tune is paved gutter-to-gutter with hooks.

"...blowing up my whole vicinity / I'm learning to stop worrying..."

This song is absolutely devastating, and in our estimation is the most devastating song of 2015. "Dog Years" is a bottomlessly poignant chamber-pop ballad from Canadian outfit Fog Lake; its whispered vocals carry a patina of menace limned by droning strings that unspool across a bed of watery piano chords. The narrator sings from a place of desolation, but the song's understated but haunting melody hints at the possibility of salvation, especially as a curtain of angelic keys swallows the song. Whether or not deliverance is ever achieved is as much as mystery as how it could have been achieved, but the understated melodrama of "Dog Years" is nonetheless perfect, and makes for a terrifically affecting piece of work.

At its best the curious music of Swings presents terrifically appealing shards of forgotten dreams, and "Tiles" is certainly the D.C. trio at its best. The song feels extracted from fleeting waking moments, when your subconscious rapidly falls away just as it reveals some deeper truth with its fading mirror. At least, that's as good an explanation as any for what is going on here, as fronter Jamie Finucane's elastic vocals are notoriously unparsible, much in the way Elizabeth Fraser's were in the front end of the Cocteau Twins catalogue. The skeletal pulse of "Tiles"'s arrangement and its cycling, ascending, straightforward melody erected from bass and guitar quarter notes set a sturdy table for Mr. Finucane's lyrics, which almost wink as they don apparent (if not actual) vocoder, change shape as vampire does to bat, and flitter off into a mysterious firmament that is distinctly the band's own.

"...one hundred percentaaaaaa WHAT THE FUCK IS HE SINGING I DON'T EVEN KNOW..."

As social challenges have mounted during this century, it has been persistently disappointing that indie rock has not responded in kind with calls to arms, with ideas, with possible leadership toward meaningful joint solutions. You might be asking, well, why should they? To which Clicky Clicky says, why shouldn't they? Instead, macro political issues were largely ignored -- and we are not the better for it. It's an idea we discussed with comrades Mike and Tim from Hard Left here last spring, around the time of the release of the Oakland-based quartet's cracking full-length debut. Album highlight "Kicking It Off" is both exhortation and affirmation, a vow to act, and we're hopeful that it can be a model to the wider independent music community, that eventually the song will be perceived as the tip of the spear. Hard Left here delivers an uplifting, energizing banger descended straight from the day of Joe Strummer and The Clash, big fuzzy guitars, vocals that testify, beats that bang. Heed the call. Start today.

There is magic in big guitars and steady harmonies and yearning sentiments: it's an age-old recipe, to be sure, but one that still can yield spine-tingling results when applied by skilled songwriters and performers. Columbus, Ohio four All Dogs certainly capture the lightning in the bottle here with "Flowers," although it is difficult to pick just one track from the band's terrific long-playing debut Kicking Every Day. Here the band seems to strongly channel classic Superchunk, but it is fronter Maryn Jones' charming, poignant vocal that is impossible to ignore. At fewer than 140 seconds in length, this song perhaps more than any other on our list likely keeps fans' fingers poised just above the play button and ready for another go, as 5, 10 and 20 listens just isn't enough. Gold.

Hand percussion like heavy steady rain (perhaps struck off her favored instrument, the viola de gamba), and quietly chanted vocals that layer and diffract, render Colleen's "This Hammer Breaks" eery and enchanting, much like the rest of her excellent 2015 set Captain Of None. The record explored mastermind Cécile Schott's love of dub reggae music, which is reflected her in the delays and reverbs that push and pull on the percussion and vocals here. The second half of the composition dives deeply into a polyrhythm and cleverly leverages production elements to render something mysterious and maximal from relatively minimal instrumentation. Squeaky, spacey tones overtake the songs and pulse through the final minute of "This Hammer Breaks," and it seems as if the entire composition is sucked down a drain at its close, adding to and not detracting from a truly mesmerizing listen.

It turns out Krill in one very real sense is not forever. And we had a hard time choosing just which tune from its 2015 swan song represented the whole of the band for Clicky Clicky. A strong argument could be made that "It Ends" hosts a multiplicity of meanings that make it a strong proxy for the set. But Krill has always been about the investigation, and so ultimately we chose the song that opens, rather than closes, A Distant Fist Unclenching as one of our favorite songs of the year. The song's rocking middle third, with bashing percussion and fronter Jonah Furman's exercised vocal, is especially engaging, but it is the song's understated coda -- and Mr. Furman's incisive questions that plumb the parameters of one's internal and external lives -- that is startlingly thrilling in its bare truth.

"...what is the proper orientation of the world to me? and does it have to be to me..."

Albums this purposefully dark can feel campy, but there is no wink and nod to be found on Spectres' stunning full-length Dying (winks and nods seem reserved for the band's videos and social media posts, which are regularly deliciously funny and irreverent). While still boasting the Bristol, England-based foursome's characteristic, Sonic Youth-indebted aural assault, "Blood In The Cups" is among the set's most melodic compositions, and its balance of beauty and firepower is terrifically compelling. Spectres' greatest skill is conjuring visceral moodscapes with its music, and "Blood In The Cups" exemplifies this, stretching anxiously but languorously across almost eight minutes with a psych-blues derived sound that recalls LA's The Warlocks. With its pulsing bass, spectral vocals, and maelstroms of guitar, "Blood In The Cups" presents a perfect storm, while highlighting Spectres' terrific vision and control.