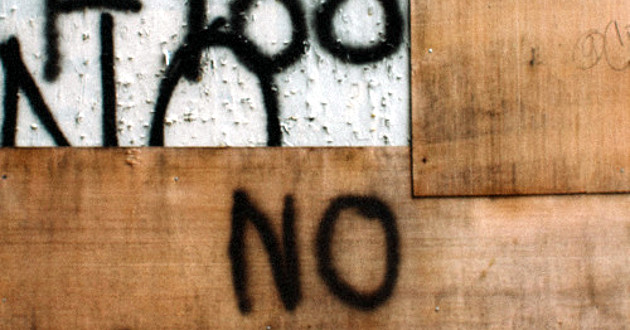 >> Richmond future-pop leading lights White Laces roll into town tomorrow at the tail end of a week-long east coast tour supporting its long-germinating third album No Floor, which hit new release bins late last month. With its latest and third record, White Laces ventures further into an aesthetic marked by dramatic electronics and vast reverbs that at times eschews live instrumentation almost entirely. The stark contrast between the guitar-centered and relatively angular sound of White Laces' early years and the boundless atmospheres it has conjured for itself more recently is no more apparent than when contrasting a recently released compilation of remastered early track, Sick Of Summer, with No Floor. No Floor is announced by the swirling faux strings and bashing electro beat of "Youth Vote," with fronter Landis Wine dropping the en medias res line "I figured I'd take a ride" as a invocation. Album preview tracks "Dots" and "Cheese" follow with increasingly greater electronic flourishes that deepen the divide between the White Laces of today and the more conventional approach of the band's early years. Indeed, as the chiming opening of "Cheese" -- whose melody echoes faintly the verse of P.I.L.'s "Rise" -- transitions to its own serene verse, it is difficult to identify any non-electronic sounds. Even so, the music never feels synthetic, in large part because Mr. Wine's soulful vocals on No Floor are the most emotionally direct of the band's entire oeuvre. In a departure from prior practice, No Floor was recorded primarily at home, with additional vocal tracking at a studio in Richmond, and it was mixed by Philadelphia hitmaker Jeff Zeigler (Mr. Zeigler had previously tracked White Laces 2014 sophomore set Trance, which we reviewed right here). White Laces performs a Boston-area show Friday night at Trixie's Palace, a non-traditional venue whose coordinates can be ascertained by consulting a knowledgeable punk rock enthusiast. Also on the bill are Jroy Divorbison, We Can All Be Sorry, Jarva Land and The Owens. Richmond-based Egghunt Records released No Floor September 30 on CD, as a digital download, and in a hyper limited edition of 50 vinyl long-playing records; purchase the set in an of its physical manifestations and in various bundles (which can include the aforementioned remaster of Sick Of Summer as well as a pretty bitchin' t-shirt) directly from the label right here.

>> With two particularly hot releases rocketing from its city limits this month, rock fans can only hope that the underpop sounds of Minneapolis are set for a renewed campaign for stylistic supremacy. Private Interests' power-pop revelation, its Only For A Moment EP, hits new release bins at the end of next week. But just tomorrow indie-pop four-piece Real Numbers releases a hotly anticipated and long-awaited full-length debut, despite having toiled in the figurative salt mines of international indie for as long as a decade. The jangle commandos' new C86-indebted collection, Wordless Wonder, is thronged with instant classics touting big melodies, scritchy guitars and maximum pep. Opener "Frank Infatuation" is timeless, and makes for an auspicious start to this high-quality release. The tune is all fuzzy strums, plunky bass, and surfy leads, delivered at a carefree, upbeat tempo, and, sure, there's a formula at work, but when the formula is this fun and well-executed, no ones cares. If you dig "Frank Infatuation" -- and it is undeniable -- make sure to check out this earlier version Real Numbers released as a digital single in 2014. Wordless Wonder's barn-storming "Just So Far Away" is even more potent, hitting hard with a chorus first before blitzkrieging through short verses and right back to the chorus again. The album truly is all killer and no filler, and will likely be featured in a number of year-end lists before 2016 is through. Eternal it-label Slumberland Records releases Wordless Wonder tomorrow on CD, as a digital download, and on white or black vinyl. Purchase your copy of the set in any or all of these formats via Slumberland right here. The record was preceded by a number of 12" EPs, cassette tracks and digital singles, all of which appear to be on offer via the Real Numbers bandcamp dojo right here. Stream the aforementioned "Frank Infatuation" and the equally fun "New Boy" via the Soundcloud embed below.