Hey This Weird Thing Happened Where Someone Gave Us Studio Time To Give Away So We Gave It To Aüva And Let's See What Happens, Shall We? 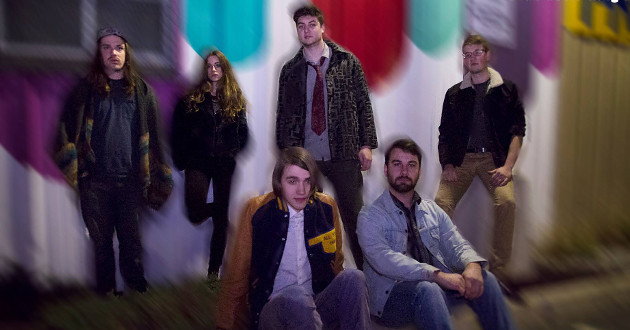 [PHOTO: Evan Xiner Hong] So, in case you haven't noticed, we're fans of rising Boston indie pop sextet Aüva. We put the act on a bill for this year's Together fest, wrote about its video clip earlier in July, and have enjoyed listening to its 2016 self-titled LP. And so, when an old friend from the Boston music scene in April presented us with a very intriguing opportunity, we were compelled to think of Aüva yet one more time. Said (very kind) friend provided us with a substantial chunk of studio time in one of the city's top studios -- and with a Boston Music Award-winning engineer nominated yet again this year -- for us to give away (just give away, just like that, like it was a beer or an extra crew neck sweater) to a deserving band. There were a couple caveats we were happy to countenance, the upshot of which was we needed to identify a young, able band that had never recorded in a proper studio before. As Aüva's prior EPs and aforementioned LP were self-recorded, they hit Clicky Clicky's short list quickly, and were the last act standing after the Clicky Clicky Brain Trust's deliberations were complete in mid-summer.

So, here's what's going to happen: next month, Aüva will enter the recently re-everythinged Mad Oak Studios in Allston Rock City for five days to record new music with the great Benny Grotto. The band has graciously agreed to document the recording sessions, which we will share with you, dear reader, in as close to real time as we can manage. What can we expect? 28-minute prog odyssey? A passel of sticky, deafening stoner-rock jams? Probably not. But the point is we don't know, and it will be exciting to find out. After a successful summer tour including a date playing adjacent to Brian Wilson in New Hampshire, Aüva has been primarily woodshedding, but area fans can catch them performing live Nov. 11 at Make Out Point; the bill also includes Amherst, Mass.' Calico Blue. Those unfamiliar with the venue would do well to consult a punk. While we wait for the show and new recordings to roll around, how about taking another listen to Aüva?