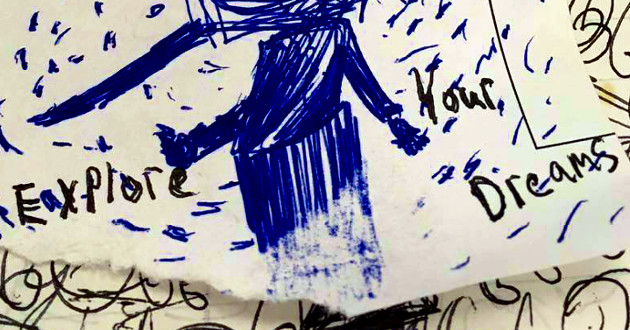 Boston lost one of its most prolific songwriters when Guillermo Sexo and Emerald Comets mastermind Reuben Bettsak decamped for the American South this summer. True to form, he remained productive right up until the end of his local residency; what has since been deemed the final Guillermo Sexo album, the space-rock triumph Eclipse [review], was released in April, and two preview tracks for a forthcoming Emerald Comets set were released to the wilds of the Internerds in August. Today we are pleased to premiere for you the entirety of that set, titled Explore Your Dreams, the first and final Emerald Comets long-player to have been recorded in Massachusetts with Hub-based collaborators Jason Layne, Kristy Foye, and Steve Rowe and with help from Western Mass. hitmaker Justin Pizzoferrato.

It being a solo vehicle, Emerald Comets' music touts a different flavor than that of the better-known Guillermo Sexo. The former has typically been quieter, rawer, and more subdued, but fans will recognize certain stylistic hallmarks, such as the pastoral psychedelia of Explore Your Dreams's placid opener "Monochrome." More so than any other Emerald Comets release to date, Explore Your Dreams feels fully realized. This is perhaps due as much to the set's relatively long gestation period as it is to the efforts of the aforementioned collaborators. The dynamic feel of upbeat early preview single "Fortress" is substantially enhanced by Mr. Pizzoferrato's drumming, and Ms. Foye's cello rests eerily but on point in the center of the mix, at times applying a swaying melodicism, at others boosting the rhythm with bowed chops.

The set ends very strong with back-to-back album highlights "Explore Your Dreams" and "Cornflakes And Stout." The former fizzes with the rough-hewn vim of a Guided By Voices track, while the latter is a gentler, more melodic, and folk rock-tinged strummer in the vein of Ultimate Painting, the quality UK combo whose delightful LP Dusk was released by Trouble In Mind Friday. Longtime readers will recognize Emerald Comets' "Lost In Our Land" and "Revolutionary Earthworms," earlier versions of which came into being as part of our inaugural Regolith songwriting challenge, which of course was undertaken by the indefatigable Bettsak and resulted in the EP Inside Dream Room (still available for free here).

Explore Your Dreams is available now via Bandcamp, and you can stream the entire collection via the embed below. While we expect it will take Mr. Bettsak some time to find collaborators in his new environs, fans in the Greater Hotlanta should certainly keep their eyes on the club listings: we'd wager it won't be too long before Bettsak brings the rock to the denizens of his new home town. We previously premiered Emerald Comets' self-titled EP here in 2014.