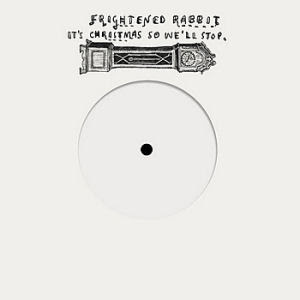 >> We were just thinking the other day that Glaswegian powerfolk trio Frightened Rabbit would be a bunch of silly Scots if they didn't release their tune "It's Christmas, So We'll Stop" at Christmas time, for obvious reasons. A demo version of the tune has been hanging around on our hard drive for months due to the kindness of a nice, connected fellow. According to this AngryApe item, Frightened Rabbit will indeed release the tune as a limited-edition single on FatCat Dec. 17. The flipside is a choral version of "It's Christmas..."

Perhaps, like us, you scratched your head at this YouTube clip posted a month ago of FR drummer Grant conducting a chorus; well, now it all makes sense, doesn't it? The song will not be featured on Frightened Rabbit's forthcoming sophomore set, which is expected to be released in late Spring 2008, so you'd best grab the single while there are copies to be grabbed. If you'd like to try before you try to buy, you can stream the track at FatCat's web site: click this link and hunt around for the media player and click "New & Forthcoming." We reviewed Frightened Rabbit's Nov. 11 Boston show here earlier this month.

>> We continue to be blown away by the great songs recorded by Birmingham, England's defunct Distophia, who you may recall we first wrote about here. The band has posted four-track and eight-track demos at this MySpace domicile, and every song is a gem. Particularly arresting is the track "Ten Inch," which wraps a nice melody around a stuttering 5/4 tempo. The track packs tons of tricks into 1:57, including airy "bops" in the bridge, an extra sludgy chorus, some really present ride cymbal work at one point, and incisive guitars with a really nice jangle hear and there. It reminds us of the incredible tracks on Mock Orange's First EP, the only Mock Orange record we've ever been able to get into, but well worth hunting down. Anyway, "Ten Inch" is an impressive, impressive song. Distophia is giving it away at the MySpace coordinates noted above, but we'll save you the trip. Distophia, why'd you have to go?

Distophia -- "Ten Inch" -- MySpace Demo
[right click and save as]

>> Mobius Band doesn't want you to forget they are kicking off another leg of their fall tour this weekend. And if you are cool you already received the email and MySpace bulletin telling you as much. One item of particular interest is the Brooklyn-based act has dug into its catalog to offer up an MP3 of "Snow On Snow," a track from the trio's 2002 EP Three. Longtime fans know that Mobius Band once had a much more pronounced post-rock bent, and while "Snow On Snow" isn't particularly post-rock-flavored, the band's first three EPs had that flava, and we've missed hearing those songs. So it is nice see the band take an interest in this very good track again. Perhaps a clue as to what to expect in its current live set? Mobius Band plays Cambridge's Middle East Downstairs Sunday night. We'll be there with our mental paper and mental pen.

>> We really, really, really wanted this Idolator item to be about Kelly Clarkson covering the amazing Judas Priest song "Screaming For Vengeance," the title cut to the very first cassette we ever bought, purchased in the record section of the Devon, Pennsylvania K-Mart in 1982 or 1983. Can you imagine Ms. Clarkson hitting that first Halfordian howl that kicks off this killer jam? Oh well, maybe she'll get around to it. Have you never seen this live video of "Screaming For Vengeance"? It'll change your life.

>> Well would ya look at that: Robert Hazard. It seems only yesterday we were comparing Philly power pop trio RunRunner to Mr. Hazard's great rock/pop concoctions of the early '80s. We reviewed RunRunner's self-titled debut here in April.
Posted by Unknown at 11/27/2007 09:21:00 PM