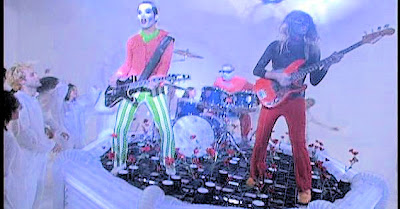 >> It's a Christmas miracle! Mere days after we bemoaned here the clear lack of a new Elevator Drops record in 2007, the band issued a MySpace bulletin announcing that OK Commuter is now available via all your favorite digital music storefronts. We recommend taking the cheap way out and getting it from EMusic here, especially since it is 13 tracks long. Unfortunately for us we've got to wait for our account to roll over Dec. 28 before we can grab it ourselves. Dang. But on the upside we've already purchased the single and compulsively horded the tracks posted to the band's MySpace wigwam earlier in the year.

>> Keeping with the Christmas theme: every band and their brother has issued a Christmas song this year, and some seem solely intended to ingratiate the bands with the blogosphere. Sure, there have been notable songs, such as the Evangelicals jam we posted here, the Frightened Rabbit jam we noted here, and also the very nice seasonal cut from Philadelphia's own The Swimmers, which we expect you can grab here. But the tune that takes the cake has just been posted here by :: clicky clicky :: favorite troubador Ted Pauly. The new jam is called "Christmas Eve, Molly Pitcher," and not only does it concern itself with a Jersey rest stop but it also describes various of our hometown landmarks. Fun fact: we and Mr. Pauly grew up on opposing edges of the same neighborhood. So when he name drops churches and fast food joints in "Christmas Eve, Molly Pitcher," we're -- as the kids say -- feeling it. More importantly, the track captures crisply those mixed feelings people of a certain age have about going home. Check it out.

>> According to this interview at Drowned In Sound, Glaswegian powerfolk trio Frightened Rabbit's sophomore set will be released in the U.S. in March, two weeks before the band appears at the annual South X Southwest music conference in Texas. The release will be preceded by another two weeks by a single for the track "Head Rolls Off," a -- gasp -- danceable track we've been loving for months, in demo version. It is going to be the highlight of the forthcoming record, we promise you that. Well, along with "Fast Blood" and all the other tracks. Hot indie rock coming.