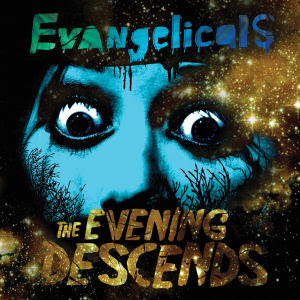 >> Oklahoma's finest psych rockers Evangelicals -- honestly, do you *really* think Flaming Lips still rock? -- have been making news faster than we could get to it in the past week. Word arrived last week that the trio (actually the band is a foursome in its latest press photos), led by songwriter and guitarist Josh Jones, will release its sophomore record The Evening Descends Jan. 22 on fledgling label concern Dead Oceans. The set will include 11 tracks, including two numbers you may already be familiar with. The melodic thumper "Skeleton Man" was recorded for a Daytrotter Session earlier this year, and a demo version of "Snowflakes" was circulated in February when the formation of Dead Oceans was announced with Evangelicals as one of its initial signings.

Speaking of new music, Mr. Jones has decided to parley his success with the 2006 Halloween blogosphere hit "Halloween Song" into a bit of a cottage industry, as today the band is distributing a second seasonal jam, "The Last Christmas On Earth." Snag the MP3 below, as well as the MP3 of the demo of "Snowflakes." A seasonal two-fer for you from Mr. Jones, as it were. Longtime readers will recall we rhapsodized about Evangelicals smoke machine-augmented and altogether dark and Hendrixian live date at TT The Bear's in Nov. 2006. You can read the review here.

>> Spinner has an exclusive on the first preview MP3 from Bob Mould's forthcoming solo set The District Line. The track is called "The Distance Between Us." Actually, the ID3 tag says "The Silence Between Us" and a cursory listen suggests the ID3 tag is correct. It also suggests the tune is not that dissimilar from Mr. Mould's later Husker Du or early solo material, as "The Silence Between Us" touts a lighter acoustic guitar-driven verse. And a great bridge section. On the whole it's a very nice track that we expect we'll be listening to a lot. Grab it here. We reviewed Mr. Mould's DVD "Circle Of Friends" here in October. The District Line will be released on Anti- in February.

>> That new Destroyer tune "Foam Hands" is the jam, albeit a patient one with fewer lyrics to pore over and decipher than we would have hoped. And there's a fair amount of strumming that consumes the last 72 seconds on the short track, which will be released -- likely to great fanfare, although Destroyer's Rubies will be hard to top -- by Merge as part of the forthcoming set Trouble In Dreams March 18. Catbird Seat has the MP3 here. Dig away.

>> An administrative note: so we had to bail on the Mobius Band show because of some work emergencies that piled up while we were in Manhattan Friday for the amazing Los Campesinos!/Spinto Band/Johnny Foreigner show. As such, we can't deliver the promised live review of the show, although we did get a brief recap from Mr. Bitter via IM last night. Here's hoping the band is back again soon.
Posted by Unknown at 12/04/2007 09:19:00 PM