Spirit Of The Season: Evangelicals' "The Halloween Song" [MP3] 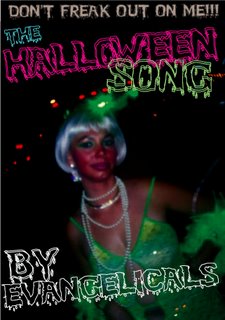 Despite Mrs. Clicky's strong affinity for Halloween in particular, we generally don't go nuts for holiday tunes or novelty cuts. Fortunately -- at least until a little shout out at the end -- the new Evangelicals Halloween tune making the rounds is very good. The song, appropriately titled "Halloween Song," has a lighter touch than the material we've all grown to love on Evangelicals' nifty 2006 release So Gone, which we reviewed here. The acoustic guitar and desktop percussion (literally -- it sounds like the percussion here is primarily a guy tapping on his desk with a pencil and his fingers) is balanced by several scoops of tasteful whimsy, here manifested as vibrato backing vocals and the occasional bleep.

The overall effect is less Flaming Lips, which is the tired comparison music writin' folks like to prop up when speaking of Evangelicals (a move we'll reluctantly perpetuate here), and more British electro-tweesters Psapp. Really. As for the shout out? Well, it is growing on us. It certainly matches the "old time radio" tone of the ghoulish backing vocals, which also, incidentally, sort of reference So Gone's opening tune "A Mouthful Of Skeletons." Check it out for yourself below. And here's the e-card that goes with the tune. Evangelicals are back on the road at the end of this month, and we are looking forward to a show here in the Boston area in mid-November. The full tour dates are at the MySpace wigwam linked below.

Evangelicals -- "The Halloween Song"
[right click and save as]

Love it, the Halloween song that is. Had not heard their CD so I listened to that as well. Loved it too. I am a fan.