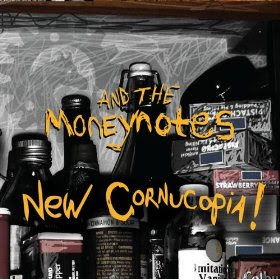 We were huge fans of erstwhile Scranton, PA-based quintet Okay Paddy, and when the band's excellent EP Where You Went? [review here] was chased with news the group had disbanded, we were commensurately bummed. The EP presented some headscratch-worthy moments during which Okay Paddy broached surprisingly trad-leaning folk-rock sounds. But for the most part the music still fit within the framework of the Pavement-meets-Weezer brilliance contained on Okay Paddy's ferociously slept-on 2006 full-length The Cactus Has A Point [review here, stream the entire thing at Last.FM here]. The one exception was Where You Went? closer "Open It Up," during which the singer -- not sure who's on vocals there -- affects a drunken Phil Lynott style while the band spreads out and jams on a gritty dirge. With that as the band's final word, it was anybody's guess where Okay Paddy would go next.

While the breakup was surprising, it is not quite as surprising as And The Moneynotes, formerly know as Dr. Horsemachine And The Moneynotes, a project that galvanized in 2006 and released an EP, This Year We Hunt, in 2007. After the release of This Year We Hunt, a founding member of Dr. Horsemachine And The Moneynotes departed; eventually, Okay Paddy fronter Mike Quinn as well as guitarist Pat Finnerty and drummer Brian Craig were brought into the fold and the band name was truncated. The newer band's mish-mash of bluegrass, vaudeville and folk rock can come across as mannered, like an aural costume play (indeed, the band dresses in period garb like early American barkeeps or reporters in its press photos). Fortunately a sense of play -- and some strong melodies -- imbue New Cornucopia! with just the right amount of pep and pop hooks to keep the cheekiness from overwhelming the proceedings. If that doesn't sell you on the band, then this hysterical documentary trailer (real? we don't know) definitely will.

And The Moneynotes' music is even more rootsy and traditional than the most straightforward moments of Where You Went?, although there is an overt sophistication to the compositions that, incidentally, seems to echo the new direction that Delaware septet the Spinto Band has charted (more about them later). Certain vestigial elements of Okay Paddy survive, including wonderful vocal harmonies and melodic moments that soar. But in some cases, as in And The Moneynotes' proggy, Decemberists-esque "The Pirates Confession Part III," so much is going on at once between the key and tempo changes that it is hard to keep up. It may be too much for certain, more pop-devoted Okay Paddy fans, but listeners with broader tastes will find the cleverness bracing. New Cornucopia!, which was produced by Spinto Band's Nick Krill (who also worked on Where You Went?), was issued by Scranton's Prairie Queen Records July 29 [hit the YouTube link below to see videos from the CD release show]. The band will promote the set with a series of live appearances this fall, and we list those below. Also below are MP3s for two tracks from New Cornucopia!, including the delight "My Kid Smokin'," as well as some Okay Paddy classics.

okay paddy were amazing, and i agree pretty much on that. but and the moneynotes live show is amazing. recommend it to anyone.