Review: Get Help | The End Of The New Country [MP3] 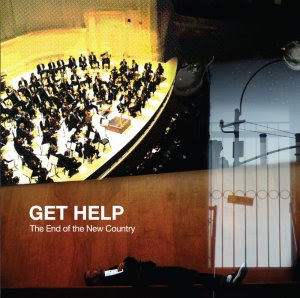 The release (well, pending release) of New York duo Get Help's solid debut is as good an occasion as any to give thanks for the stalwart musicians out there who make dependable indie rock. Not dancepunk, not nu-rave, not electroclash, not... well, you get the picture. There are now countless bands, and many of them chase countless, cycling trends. Thankfully there are still plenty of acts making great music without aping the latest tight-legged or baggy-arsed hype-riders. Like The New Year. Like Thalia Zedek. And like Get Help.

The web site of Boston- and New York-based indie rock giants The Beatings continues to offer its message, "welcome to the country." So it is hard not to view the title The End Of The New Country as a sort of response, what with 50% of Get Help being comprised by Beatings guitarist and co-fronter Tony Skalicky. There is definitely a sense of old endings and new beginnings baked into the tracks on The End Of The New Country, particularly the anthemic rocker "Red Jacket Orchards" (a real place, incidentally -- the weird thing is we found that reference totally by accident) and the pensive strummer "Life Is Full Of Surprises." The other half of the the duo -- which is augmented for live performances by various labelmates and cohorts -- is Mike Ingenthron of Strikes Again. All three of the aforementioned acts record for Midriff Records, a bi-city collective formed by The Beatings seven years ago. With all those tight relationships in place, it is little wonder that Mssrs. Skalicky and Ingenthron's record doesn't stray far from the Grade A indie rock The Beatings trade in, but it is certainly more than a small comfort.

Like the solo efforts of The Beatings' Eldridge Rodriquez, Get Help doesn't fully embrace the kinetic squawl and electric snarl the characterizes the most compelling Beatings tracks. Instead, The End Of The New Country is as much as collection of moods as it is a group of songs. To that end, Get Help deploys reverbs, acoustic guitars and keys ("Travelers Shave Kit," "Punishing Good Deeds") with the same facility as the distortion levied in the balls-to-the-wall title track. As far as points of reference are concerned, the ballad "All Else Fails" is reminiscent of Yo La Tengo's "Tears Are In Your Eyes," as is the looping guitar at the close of the aforementioned "Travelers Shave Kit. The breezy rocker "It Begins Well" sounds like newer New Radiant Storm King. Mostly of course, Get Help's music sounds like good indie rock. Midriff Records releases The End Of The New Country Oct. 14, and the band will perform a record release show at Great Scott the following night. Now get a load of the title track.