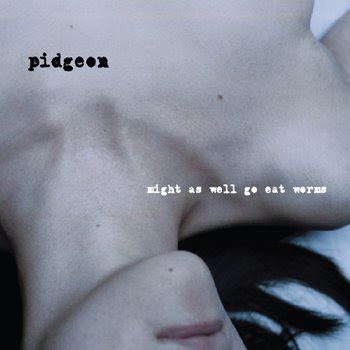 The long-awaited sophomore set from San Francisco quintet Pidgeon is not groundbreaking, but it is refreshingly raw and uncompromising. The seven-year-old act employs a broad scope spanning intense screamo and quietly haunting, melodic sections that recall early Smashing Pumpkins. Mostly, Pidgeon is heavy. The bootcrunch of its three-guitar attack gives the choruses of "California (Is For F*ckers)" the impact of a flurry of bodyblows, an impact not diminished by the sweetness of the layered vocal lines. The brilliantly titled "Kafka Does His Shopping From Home" thrashes through an old school hardcore-influenced verse that could have been lifted from the mighty California straightedge act Uniform Choice. Might As Well Go Eat Worms is Pidgeon's first record since the 2004 debut From Gutter With Love. The quintet completed the new record in 2006, but untold hardships kept it from being released for two-and-a-half years.

Despite the various styles of the band's three singers -- whose outputs range from blackout-inducing yelling to the angelic singing of sole female member Valerie Iwamasa -- Might As Well Go Eat Worms offers a steady stream of satisfying, hair-raising moments. There's the Queen-esque twin-guitar solo in the midst of "The Gimmick Monster," and then the beautifully pastoral coda that consumes the final minute of the same song. "Hail To The Coke Nose" is a Black Sabbath-inspired riff-fest that may very well result in some head-banging. If there is a hit song on the record, it is the anthem "Helpless," which has an exhilarating chorus where the breathless vocals are so raw they almost crack. The track builds from a narcotic dream-state to that explosive crescendo over the course of seven minutes. Absolutely Kosher releases Might As Well Go Eat Worms Sept. 23. This is also the same day that the next slate of Replacements reissues, the latest TV On The Radio record and Johnny Foreigner's debut are in stores, so you're going to have to cut a lot of lawns this weekend. Plan accordingly. While we'd like very much to offer you an MP3 of "Helpless," Absolutely Kosher is offering "California (Is For F*ckers), and who are we to look a gift horse in the mouth?