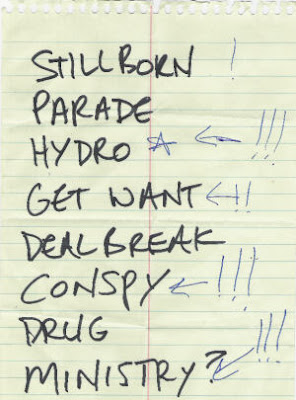 As the hurriedly scribbled notes (well, arrows, exclamation points and one star) we appended to the set list at left attest, we were pretty jazzed by the E.R. And The New Jerseys set during last week's Midriff Records showcase at TT's. One of the reasons we were so won over was that the performance surpassed our expectations. We had seen E.R. only six weeks earlier, and thought they played a strong set [read our review here]. And yet Thursday's performance was remarkably better; it honestly gave us pause as we left the club and made us wonder why some bands have nights that are good, and some that are sublime.

Certainly the sound at TT's is superior to the more ad hoc sound system over at PA's Lounge. But that's only part of the story. The quartet's energy level was high, and while E.R.'s supporting players The New Jerseys (a/k/a The Spanish Armada) are typically somewhat reserved, the three delivered particularly fervent performances themselves. Drummer Dan Parlin systematically brutalized his drum kit, rarely looking up from the, ahem, beatings he administered to its various components; bassist Bill Scales was tapped into a serious Entwhistle vibe -- maybe its just the beard? -- and knocked out melodic bass parts with counter-melodies we don't recall hearing on the band's recent debut This Conspiracy Against Us; guitarist Greg Lyons effortlessly coaxed spot-on feedback, slicing leads and gripping backing vocals.

The biggest surprise of the night was E.R.'s encore. What is noted neutrally at left as simply "Ministry" was actually a Ministry cover, namely the band's popular industrial screamer "Stigmata." Needless to say, this was insane. Kehoe man-handled the track's merciless beat, with its tell-tale stuttering rhythm giving away what was about to happen for those of us who weathered a de rigeur industrial phase at the turn of the '90s. And Mr. Rodriguez's usual bassy howl didn't need much embellishment to push it into Al Jourgensen's range.

Despite that surprise, based on the star (and of course the exclamation points) we jotted on the set list, you can see we thought the tune "Why I Fear The Ocean" was the short set's emotional apex (we expect the title on the set list "hydro" is short for hydrophobia). On This Conspiracy Against Us the track is a study in texture and production techniques. Stripped of the swirling guitar tracks, damaged angel backing vocals and violins, the track is a barn burner when performed live.

E.R.'s This Conspiracy Against Us was issued Feb. 27 on Midriff; we reviewed it here. Here's the video for Ministry's "Stigmata," posted over at YouTube. And since we've sort of opened the door on Ministry news with this item, we should note that the storied industrial act will release in July a new set entitled Rio Grande Dub, which we think is remixes of the band's 2006 set Rio Grande Blood. Anyway, here are some E.R. tracks: