Various Good Reasons To Write About Johnny Foreigner Yet Again 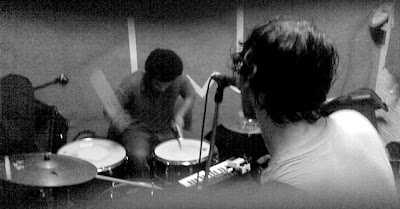 [UPDATED] If we lived in the UK we would have seen earlier tonight (likely in person, because the band had scads of guest passes) criminally underknown Birmingham-based noise pop heavyweights Johnny Foreigner performing for the Channel 4 teevee cameras at London's Carling Academy Islington. The appearance was part of the band's bid for a slot at this summer's V Festival. At this point, because of the time change, the TV appearance has already transpired, but we're not seeing anything on the YouTubes yet [there was just a MySpace bulletin from the band, which surely must never sleep at night, as it is basically the middle of the night in the UK right now. Anyway, word is their performance doesn't actually air until June 20. Oh well]. For now we wait. Anyway, it did actually take us burning all of our Johnny Foreigner tracks to a CD and playing them incessantly in the car (as recommended in a sidelong way by the band in a MySpace bulletin last month) to unlock the secrets of the band's most recent tracks (which we first raved about here).

The obvious charms are, as always, the manic, holler-along verses and choruses and disheveled, melodic slam of the tunes. But after a bunch of listens the tricky stuff announces itself. "Our Bipolar Friends" opens with bassist Kelly's intro invoking the stealth of a ninja before stumbling into a hot rock song. A little twist jumped out at us as we sat in Mother's Day traffic -- the tune has an asymmetrical bridge. It is comprised of two four-beat chunks sandwiched by a five-beat chunk and a three-beat chunk. Even cooler, perhaps, is the breakdown in "Suicide Pact Yeh." At about 1:00 in singer and guitarist Alexei goes a capella and the drums get all squashy, as if the engineer closed down all the mics on the drum kit save for a distant room mic. In a broom closet. Down the hall. It is a very cool effect. Anyway, we've raved about the tracks before, but we didn't post to them then. Tonight, we're posting them. And a note for those in the U.K. -- on May 21 Laundrette Recording Co. will issue Johnny Foreigner's second release, a split single with Sunset Cinema Club (details here at the excellent Index 7 site and also here). You can already stream the typically exuberant track at JoFo's MySpace dojo here.