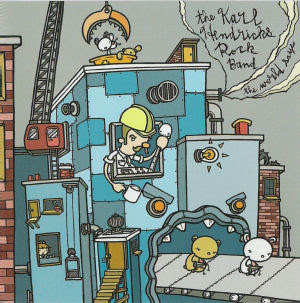 Karl Hendricks' latest collection is remarkable for its looseness. Although Mr. Hendricks has always displayed a sense of humor on the records of his eponymous trio, relaxed is not the first adjective that likely comes to mind for those of us who came of age listening to his tales of those broken by love. However, there has been a perceptible change in attitude on Hendricks' recordings since the late '90s. With a new combo christened The Karl Hendricks Rock Band and with the release of The World Says, our hero's outlook still seems resigned but also almost content -- and downright sunny in comparison to feel-bad numbers from his back catalog such as "Your Damned Impertinence."

And so, miraculously, Hendricks has transformed from a guy making visceral break-up songs into a reliable purveyor of summery (albeit still occasionally melancholy) rock jams. Along the way he shed most if not all of the anger that featured in his mid-'90s catalog, but none of his musical ability to land an emotional punch. What is left on The World Says -- Hendricks' eleventh full-length if you count a few cassettes we're not familiar with -- is fortified with unobfuscated charm and world-weary humor ("I'm Not Crying Karl," "The Last Uncompromising Hardcore Band").

As opposed to the tightly composed downer-ballads and sonic assaults of Hendricks' bygone days, The World Says showcases loose, crunching rockers packing plenty of big guitars. Behold the twisting, fuzzy and Television-like riffs in the denoument of the aforementioned "I'm Not Crying Karl." The rocker "Irony Fails Me" recalls "Nogales By Tuesday" from the excellent 1996 set For A While, It Was Funny (a record that memorably opens with the lyric "Are you naked and high on drugs?"). And even these days, after almost two decades recording indie rock records, the stuff of relationships remains on Hendricks' mind, as evidenced by the yearning album highlight "Banned For Life."

The tone of the new record, recorded in the band's practice space, is noticeably influenced by the lyrical playing of new second guitarist Alexei Plotnicov, to whom Hendricks ascribes adjectives including "Allman-esque" -- surprisingly, in a number of places that characterization is very on point. Plotnicov adds significant weight and riffage to "Mediocre Advice," a number that wouldn't sound out of place on one of those mid-'90s, Dinosaur Jr. records. Of course, a Karl Hendricks record would not be a Karl Hendricks record without an epic-length track or two, such as the aforementioned "Your Damned Impertinence" from 1995's A Gesture of Kindness or the amazing "The Summer Of Warm Beer" from 2003's The Jerks Win Again [which we reviewed here for Junkmedia]. On The World Says, Hendricks obliges with the mind-numbingly good, Neil Young and Crazy Horse-tinged rockathon "California In October."

According to Hendricks, there are no current plans to tour to support the release of The World Says. The album was issued April 30 on Surplus Anxiety, and you can buy it right here from Midheaven Mailorder. As a bit of inducement, here are a couple streams.