Sleeping In The Aviary And The Perfect "Pop Song" [MP3s] 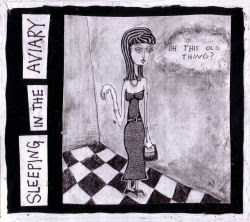 When you title a song "Pop Song" you'd best know what you are doing. Fortunately, we can think of three examples where bands surpass the expectations set by being cheeky. Certainly R.E.M. succeeded swimmingly with "Pop Song '89," a tune far less generic than its tongue-in-cheek name evokes. And Tullycraft's "Pop Songs Your New Boyfriend's Too Stupid To Know About" takes R.E.M.'s meta-queries on interpersonal relations and fashions them into twee means for defeating a romantic rival. Even so, while the cut is long on cleverness, it doesn't rock. This is not a problem with Sleeping In The Aviary's "Pop Song." The 83-second blast of verses, choruses and yeahs is second for second the best power-pop jam of 2007 to date.

The four-year-old trio based out of Madison, Wisconsin has brevity on the brain, as its recently released Oh, This Old Thing? clocks in at a lean 20 minutes. A second winner from the set is "Another Girl," an MP3 of which we've posted below along with "Pop Song." Sleeping In The Aviary just completed a tour in support of the record, which included a local date at the Abbey Lounge in Cambridge a couple weeks back we missed because we had to work late. Those with a yen to see the band make the rock sounds in person have a few opportunities later in the spring and summer. We've posted the few currently confirmed dates below. Oh, This Old Thing? was released Feb. 6 on Science Of Sound. We're also posting a link to an album stream that we recommend.

Email ThisBlogThis!Share to TwitterShare to FacebookShare to Pinterest
Labels: R.E.M., Science Of Sound, Sleeping In The Aviary, Tullycraft