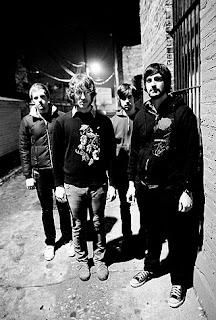 >> Our man Stengelero now and again turns us onto a hot rock 'n' roll act, and recently he emphasized to us that noodly post-rockers Maps & Atlases were the real deal. So we got our hands on the Chicago-based quartet's 2006 self-recorded and self-released record Trees, Swallows, Houses a couple months back. We've been smitten ever since with its maelstrom of melody and guitar spasms that somehow bridges the space between freak-folk and hardcore. In the '90s when we didn't know any better we'd probably refer to this as jazz-core; here we'll just say that if you've yearned for a band that seemingly gives equal credence to its love of Fugazi and Bob Wills And His Texas Playboys, stop your yearning. We were surprised to get an email this evening that Trees, Swallows, Houses is already getting reissued; Sargent House will release the set Aug. 7. Wanna stream the whole record for nada, gratis, free-like? Here it is below inside one of those funky fresh Imeem players. And here above the player is a link to an MP3 of the stunning album opener "Every Place Is A House."

Maps & Atlases -- "Every Place Is A House" -- Trees, Swallows, Houses
[right click and save as]

>> The 'Nac reports here that Bottomless Pit, the act featuring the surviving members of late-lamented indie rock stars Silkworm, will soon issue an impressive debut. Hammer Of The Gods will be issued as a double album; the razzmatazz is that the records are 45 RPM discs and all four sides contain two songs each. Pretty darn cool. Bottomless Pit features Silworm's Tim Midgett and Andy Cohen along with Seam drummer Chris Manfrin and 27's Brian Orchard on bass. Silkworm drummer Michael Dahlquist was senselessly killed in 2005 by a mentally disturbed vehicle operator. There is no release date yet for Hammer Of The Gods; for educated guesses on its track listing, hit the link to The 'Nac in the first sentence. Finally, let's not forget that IODA's Promonet has a classic Silkwork cut ripe for the downloading. Here's "Punch Drunk Five," from the excellent 1994 set In The West.

Download "Punch Drunk Five" (mp3)
from "In The West"
by Silkworm
C/Z
>> Built On A Weak Spot here continues a hot streak today with a short survey of erstwhile Pittsburgh math rockers Hurl. Make certain you download the excellent track "Dual Showmen," which features a lyric that always use to get us right in the gut: "and I wouldn't have talked myself to sleep, for good..." We saw Hurl live a couple times around 1995 and they were a hot ticket. We also seem to recall that one of the fellows from Hurl was quoted in an MTV News story about one of the Lollapaloozas saying that Guided By Voices possessed "the ancient Chinese secret to indie rock." Or maybe we dreamed that. Sometimes we have trouble differentiating our real memories from our fake ones. Anyway, Hurl was a stupendous band who did the LOUDquietLOUD thing as well as anyone in the mid-'90s. So make certain to check out all the MP3s at BOAWS.
Posted by Unknown at 5/07/2007 08:39:00 PM