That Which Is Good: Adam Franklin's "Seize The Day" [MP3] 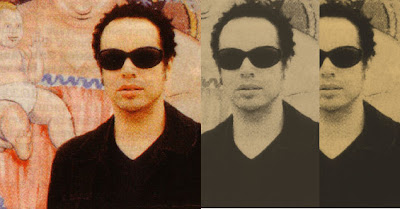 Swervedriver was one of the those bands that we learned about picking up Villanova University's college radio station while in high school in the early '90s, along with RIDE and Drop Nineteens and a little act called Nirvana among others. We never dropped the money to get the Swervedriver records because our hombre WPRS did. But we know the big tracks and can recognize the band when it pops up on college radio, as it still does now and again even these days. So, while not a student of Swervedriver or the more contemporary goings-on of former band fronter Adam Franklin (despite coverage -- 1, 2 -- of Mr. Franklin's recent work over at The 'Nac), we can say without reservation that the lead-off track from his forthcoming set is a hot one. We've linked to an MP3 of "Seize The Day" below, which opens Bolts Of Melody, which is slated for release June 26. Bolts Of Melody is Franklin's seventh post-Swervedriver release since the band broke up in 1999 and the first album issued under his own name. If you like what you hear you can get several more downloads at Franklin's InterNet Home Page right here [click "downloads"].