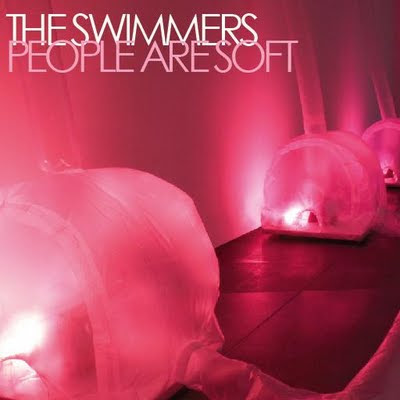 The title to Philadelphia-based The Swimmers' ambitious sophomore set is not a put-down, it's a poignant acknowledgment of human flaws. Or at least that is the impression we get after listening to People Are Soft, which is starkly different from the band's excellent 2008 debut Fighting Trees. The latter album was a scritchy, upbeat collection of jangly, rootsy indie rockers that sounded like the earliest Wilco records. By contrast People Are Soft is awash in icy, futuristic synths (as in the New Order-y "Anything Together"), electronically augmented rhythm tracks and imaginative production.

The remarkable difference -- production-wise -- can in part be attributed to the fact that between the recording of the two records The Swimmers built their own home studio. And if it wasn't for a freshly realized, pronounced darkness that hangs over People Are Soft we'd chalk up the startlingly dissimilar sonic palette purely to the band's newfound freedom to experiment in the studio without having to worry about paying for all the hours. Album closer "Try To Settle In" certainly takes an everything-and-the-kitchen sink approach while recreating a sound -- one melodically akin toThe Clash's "Hitsville UK" -- that wouldn't be out of place on The Magnetic Fields' recent Distortion. The second track of People Are Soft, "A Hundred Hearts," stomps along with a slight hint of roller disco funk that recalls Lilys' recent dance floor filler "A Diana's Diana" (for that matter, the closing seconds of album opener "Shelter" sound very similar to the closing seconds of Lilys' wonderful "Black Carpet Magic"). The lazery clean, glossy production of the new Swimmers record not only contrasts with the moodier outlook in the new songs, but also places them in the same sort of sonic area as another Philly band that drastically retooled (along with a name change and personnel pruning) from a rootsy sound to a spacey, glossy and studio-influenced one: Sun Airway.

As we alluded to above, even more jarring is the darker vibe of the new record, whose songs in sum suggest a loss of innocence. Where Fighting Trees included wide-eyed and infectious anthems like "Heaven," "Pocket Full Of Gold" and "It's Time They Knew," People Are Soft's post-lapsarian sound is more troubled and reflective. The overdriven rocker (and album highlight) "Drug Party" includes the lines "when they cut me open they'll see why I didn't fit" and "I'm always outside getting sick." These sentiments, that loss of innocence, could easily be a result of the band -- led by Steve Yutzy-Burkey and whose principals met at a small Bible college -- moving to the big city and confronting new, more complicated lives. But if we had to venture a guess we'd say that the new record carries a certain resignation and weariness that manifests itself among 20-somethings when youth and idealism become increasingly distant memories. People Are Soft is released by Mad Dragon Records today. Fighting Trees was named one of our top 10 records of 2008 right here, and we reviewed it here. The band will tour briefly to support the new collection, and Boston-area fans should make a special note about the Dec. 12 date at PA's Lounge.

...makes for a good line, but it was actually a very open, liberal, and engaged in the life of the world Christian-affiliated liberal arts college...and Steve and the rest have been part of Philly life for a decade or so now, so...