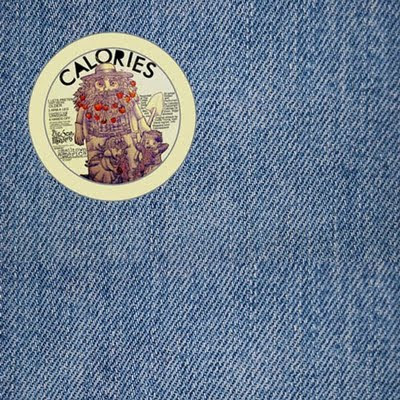 OK Calories EP review go the idea of a Calories EP is sort of laughable because the brilliant Birmingham, England-based power trio's no-bullshit approach to melodic, sculpted punkwhatever already ensures that there will be no dillying or dallying among the proceedings and the band's debut full-length was 10 songs long but a blindingly paced 23 minutes short so a four-song EP could almost theoretically take you just one cigarette to listen to the whole thing, or even a negative amount of time, yeah? The title track to Let's Pretend That We're Older is an end-of-the-night beer hall anthem, well, more contemplative than that, but the point being if we were pretending we were younger this is the song that we'd dial up every night with our last dollar for the jukebox and pound our thick-bottomed mugs to the shellacked tabletop along to as the barkeep reaches behind the dusty venetians and kills the window fluorescents and props open the door with a tired and meaningfully silent getthefuckout. Paradoxically the best track on this EP is buried in the side B track 1 slot were this a vinyl release, "Expect The Language" of the four tunes here best conveys Calories' characteristic panoramic optimism and that feeling that this day is going to be your day, which the substantially darker "Let's Pretend That We're Older" lacks a bit. In sum the EP is a fine collection to tide over fans who frothed at the debut Adventuring and are chewing fingers down to wrists waiting for the threesome's next full-length, which we are told will be issued in March by Smalltown America under the title Habitations. Let's Pretend That We're Older was co-released earlier this month by the aforementioned Smalltown America and Big Scary Monsters; the thing is being sold in a limited-edition denim sheath with a badge pinned to the front, the awesomeness of which need not be expounded upon. Mysterious commenters tell us that Habitations will be preceded in the new year by a single released by Coventry-based Tough Love Records for "The Mortal Boys" b/w "Drink The Potion," the a-side of which will appear on Habitations.