It would be easy to go on for a thousand words about drivin n cryin (in fact, when I started this review it was starting to look like I would), because theirs has been a long and complex story since singer-sonwriter Kevn Kinney and bassist/mandolinist Tim Nielsen released the first album with the band's first lineup, 1986's Scarred But Smarter. So let's boil it down. Here's what you need to know: drivin n cryin are a part southern rock, part country rock, part folk rock, and part hard rock working class band from Atlanta, GA. They like folk music as much as they like the Stooges, and Aerosmith as much as country music.

And why not, right? That leads to glorious live shows that start with balls-out rockers like "Detroit City" from their great new album Great American Bubble Factory, and end with their sing-along country anthem "Straight To Hell" from their 1989 classic Mystery Road. That's how it went Sunday night at TT the Bear's, where drivin n cryin played a more-than-generous two hour set to a modest - but rabid - Sunday night crowd, their first in the area since they supported their self-titled last album opening for The Who's Quadrophenia redux tour stop at Great Woods in 1997.

That gave them plenty of time for a survey of the band's entire career as well as Kinney's solo career (the line between which has always been blurred). The fan favorites were all there: the hooky southern rock of "Honeysuckle Blue" and deep cut "Peacemaker" from 1989's Mystery Road; the hard rock riffs of the title track and "The Innocent" from the 1990's commercial stab at glory that was Fly Me Courageous, the working man angst of "Scarred But Smarter" (more or less the template for Kinney's songwriting) from their 1986 debut; and - of course! - the can't-do-anything-right staple "Straight To Hell." In between there were oddball covers: Nirvana's "All Apologies," sung by drummer Dave V. Johnson, the Dictators' "I Stand Tall" (which is on the new album), and the Beatles' "Why Don't We Do It In The Road;" the latter of which, bizarrely, was interpolated into "Straight To Hell." Latter-day guitarist Mac Carter beefed-up the rockin' stuff, added color to the quiet stuff, and played a particular beauty of a solo on the the non-album gospel/blues jam apparently called "Blues On Top Of Blues." All the while, Kinney was our charming host, weaving stories into the intros and breaks of songs making the whole thing feel as much like a back porch hang as rock rave-up. 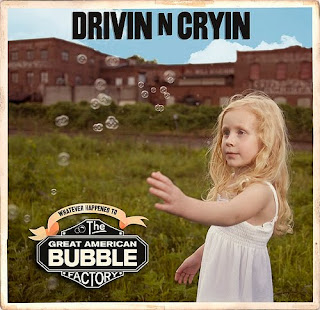 While it's been a while since the band has been active beyond handfuls of shows in the southeast, it helps that they've released such a strong new album, (Whatever Happened to The) Great American Bubble Factory. The power-popping title track adding a new wrinkle to the band's sound with horns heralding over the insistent rhythm. Inspired Kinney's purchase from a dollar store a bottle of bubbles for his grand-daughter, "...Bubble Factory" is the sort of blue-collar rumination on which Kinney has long mused (as he points out, "if you can make it there, you can make it here"), and "Preapproved, Predenied" and "This Town" ask similar questions. Rockers like "Detroit City," a tribute to the likes of the Stooges and the MC5, "Get Around Kid," and "Trainwreck," along with folk rocker "Midwestern Blues," a reprise from an earlier Kinney solo album, and the strummy mandolin-flavored "Don't You Know That I Know That You Know?" help balance the record and keep things from getting too heavy.

This is a great, old-fashioned, unapologetic, rock and roll record with its heart in the right place and a drum stick on the bell of a ride cymbal at all the right times. It feels like it was always in the band's catalog.-Michael Piantigini