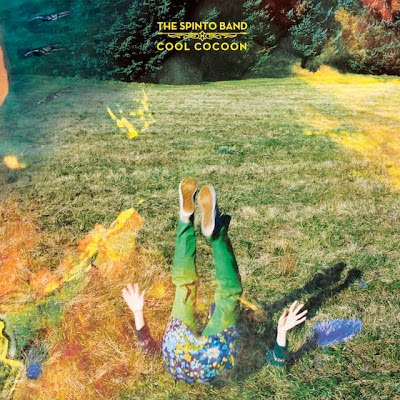 Delaware-spawned indie pop journeymen The Spinto Band are on a roll: in only the past nine months the band has rejuvenated a two-decade career with the slick pop of the full-length Shy Pursuit (preview here), revitalized their own record label and toured extensively. And now the quintet is already back with a new long-player, Cool Cocoon. Picking up right where Shy Pursuit left off, the new collection contains yet more of the band's sparkling brand of well-crafted, classic pop. Cool Cocoon commences with "Shake It Off" (previously reviewed here), a tune that echoes rock-and-roll touchstones without diluting Spinto Band's characteristic cool and charm. That's no small feat, as the hooks here and elsewhere on Cool Cocoon are so universal and saccharine one might think their apparent familiarity would stunt their appeal. But that's just not the case. In fact, thanks to singer Nick Krill's quavering falsetto, the warmly compressed production, and crafty arrangements the act succeeds over and over in delivering unto fans singular pop statements. The Spinto Band's reach never exceeds its grasp.

Known for its bright sound and tumbling tempo changes, Spinto Band sounds best at its most upbeat. "Breath Goes In," "Enemy," and the funkier "Memo" all feature a kineticism that drives the brand's brilliant melodies. Imaginative guitar sounds crash in and out, the drums snap along with only the bounciest of beats, and supporting voices push each hook to maximum lushness. "Na Na Na" not only shows off the retro-bubblegum accouterments with which the group are well-versed, but also features one of many creative guitar solos that populate the album. It's as if the band holds back its meanest, grittiest player until he is about to piss himself, and only then unleashes him for a frenetic, quick flash of a solo, twice as loud as everything else, and gone as soon as it starts. Why don't more bands do that? Perhaps the highlight of the record is "Amy + Jen." Sounding like a strummy cut off The Tyde’s Thrice album, Mr. Krill and company dash off vibrato guitar splashes, choppy acoustics and bursts of buzz-guitar to cook up a classic summery jam. Drummer Jeffrey Hobson's emphasis on the beginning of each imploring chorus punches up the tune and adds to its timeless air.

Cool Cocoon touts an even share of slower numbers that aim for the heart via an expanding vocabulary of studio effects. "What I Love" offers a rising music hall melody and a piano line that recalls the fluttering tenderness of The Rolling Stones’ stone-cold classic "She’s A Rainbow;" the tune includes yet another brilliant guitar flash-solo. The folksy and spare "Look Away" exposes another dimension of the band yet heard. Like many groups trading in indie pop, The Spinto Band can't take credit for inventing the wheel. But the band’s precision and sincere love of rock’s long flirtation with classic pop is more than enough to make Cool Cocoon a keeper. Another album or two of this level of songwriting and the band should start expecting comparisons to Harry Nilsson, Ray Davies, Paul McCartney and their venerated like. Cool Cocoon is released on The Spinto Band's own Spintonic Recordings Tuesday; stream "Shake It Off" via the embed below. -- Edward Charlton