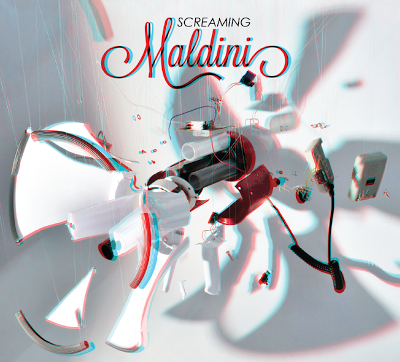 When we sit around and think about what the inside of Screaming Maldini fronter Nick Cox's head must look like -- something one does after listening to great quantities of his brilliant, Sheffield, England-based sextet's euphoric, exuberant pop -- we imagine something like those bizarre animations Terry Gilliam contributed to "Monty Python's Flying Circus." Indeed, Mr. Cox and his cohort's music is filled with wonder, whimsy, and a feeling that the possibilities are limitless ("but sometimes it's glorious / and sometimes this city shines on us," so goes a verse to the single "Summer Somewhere"). And so it was with no small relief that finally, some four years after first popping onto our radar at Clicky Clicky, Screaming Maldini finally delivered unto us this week a full-length debut, simply titled Screaming Maldini. The arresting collection bursts with the band's singular brand of maximalist, kaleidoscopic pop and features a dozen prog- and vintage exotica-tinged tunes that are deftly composed and meticulously arranged, from the five-part vocal harmonies to the bright, detailed arrangements of guitars, keys, horns and percussion. The record proves definitively and twelve times over that, for Screaming Maldini, no detail is too small, no melodic idea too big: there are more ideas in one of its songs than most bands generate over the course of a career.

The well-sequenced collection touts an inexorable rush and push that draws listeners in and speeds them along, even across a sea of odd time signatures and some charming but more downtempo ballads. With considerable pomp (but never pompous), Screaming Maldini opens with the latest single, the euphoric, exuberant "The Awakening." It is one of four tunes that will be new to ardent fans, as the balance of the songs were previously issued as singles, b-sides or EP tracks. That said, there is a cohesiveness to the full-length; we wouldn't go so far as to say the collection is greater than the sum of its parts, but we will say that its parts do make for a brilliant whole. The order is front-loaded with the singles "The Awakening," "Life In Glorious Stereo," and the aforementioned "Summer Somewhere," then jumps to new recordings of two tunes from the band's triumphant And The Kookaburra EP [preview], "Secret Sounds" and "I Know That You Know That I Would Wipe The Snowflake From Your Eye." This latter track, somehow never a single, is one of the most sublime in the band's catalog, and features some incredible lyrical pay-offs including the drawn-out, titular declaration. Top it off with the gentle chorus, quietly urging "slow down, slow down" amid muted horn and staccato guitar, and you've got classic Maldini brilliance.

After a pair of stirring ballads -- including the amazing, Gina Walters-sung "Minor Alterations" -- the album closes with the electric, Latin-tinged hand-clapper "Four Hours From Now," which is seemingly equal parts disco, salsa and football anthem. The wide-eyed number emphasizes once more the band's almost unparalleled chops and vim. Screaming Maldini was released Monday by the sextet's French label HipHipHip in a limited edition of white vinyl LPs, as well as on CD and download; the art on the LP and CD packs are rendered in 3D and ship with 3D glasses. Screaming Maldini launch tomorrow night its biggest UK tour yet to support the album release, and for the first time will be bringing along their own sound man -- so look out UK! The tour wraps in a few weeks with a homecoming show at The Harley March 2. Hopefully fans won't have to wait four years for the next one!

Email ThisBlogThis!Share to TwitterShare to FacebookShare to Pinterest
Labels: Screaming Maldini, The Jam