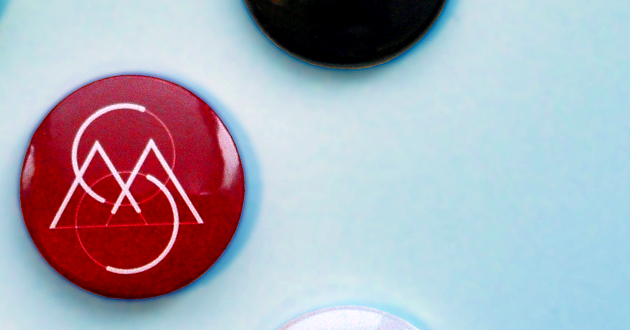 >> It snowed here in Boston Sunday, a sure sign that the inevitable seasonal change is coming. But from the standpoint of the blog, there has been even more striking change of late among the constellations of indie rock acts the blog champions. In recent months we've seen Clicky Clicky faves Young Adults and Soccer Mom call it a day, and two additional hometown favorites, The Hush Now and Varsity Drag, are going on hiatus and departing for the opposite coast, respectively. The number of bands shutting down or changing venue feels like an almost generational sea change, and we're left wondering who will be our new obsessions? That feeling was compounded last week with the announcement that Sheffield, England-based indie pop savants Screaming Maldini were hanging up their proverbial boots for good. The act -- then just a trio -- first breeched our radar about six years ago with an email from Maldini mastermind Nick Cox, who invited us to have a listen to hyerpop gems including an early version of the tune "The Extraordinary." The song would later help anchor the band's mind-bending 2010 EP And The Kookaburra, which was released by Oxford indie powerhouse Alcopop!, and additional EPs and an impressive self-titled full-length followed. The band announced early this year a monthly series of free songs, one which we hoped would culminate with some sort of album announcement. But, alas, Screaming Maldini had other ideas. In a statement on its Tumblr last week, the now-sextet stated it would play its final show at Queen's Social Club in Sheffield Dec. 5, with Laurel Canyons supporting. There are a few more installments of the monthly song series to roll out yet, including this month's: a cover of fellow Sheffielders Pulp's "Last Day Of The Miners' Strike." The tune was the only new track included on Pulp's 2002 hits collection titled Hits, oddly enough, and it tells the tale of a labor struggle in the UK three decades ago. One that, Wikipedia helpfully points out, didn't end well for our brothers and sisters in the labor movement. Screaming Maldini's is an appropriately solemn and somber rendition, shuffling drums, slowly rolling piano chords and a strong vocal from Gina Walters, whose exhortations to "lay your burden down" are chilling given the context. Stream the tune below via the embed. We're also including a stream of the band's transcendent pop ballad "I Know That You Know That I Would Wipe Away The Snowflake From Your Eye," because, well, it encapsulates the magic, romance and beauty that came to the band with such startling ease. We don't expect we've heard the last from Mr. Cox, Ms. Walters and the rest of the Maldini gang -- they are just too supremely talented to dissolve into shadow once the stage lights are cut. But, for now, tip a 40 for Screaming Maldini, maximalist pop collosus: they fought the good fight, they transported us to a better place with their music.

>> While the recent news surrounding Birmingham, England-based ambient guitar-pop project Mutes was that it has transmogrified into a full-band enterprise (featuring Johnny Foreigner drummer/Fridge Poetry mastermind Junior Elvis Washington Laidley on the cans, no less), the project's latest release -- a beautifully stirring and delicate EP titled No One Is Nowhere -- remains a solo affair. The seven-song collection wraps ethereal electric guitar loops around gritty acoustic guitar playing, and lays over top James Brown's affecting and spectral tenor. The overall effect is impressionist and wistful, and we stand by our initial comparisons to The Feelies and Flying Saucer Attack, although there is certainly more of the latter here on this new collection than the former. Indeed, the longest tune of the set, the enchanting, six-minute-plus song "Horror," completely eschews recognizable acoustic guitar -- as well as trad song structure -- and instead presents a prismatic mirage of processed and looped melodies and feedback. The gauzy (and even shoegazey) new compositions place a lot of the emphasis on the first-rate melodies and deep zones Mr. Brown is able to conjure. We expect this release may be the last relatively understated collection from Mutes, as all signs point to Mutes 2.0 being a more dynamic and muscular affair. No One Is Nowhere is available as a bundle that includes a Lewes Herriot-designed t-shirt and digital download, and also as a simple standalone download, both of which can be order from Mutes' Bandcamp wigwam right here. Mutes' next live date will be a show Nov. 14 with Clicky Clicky faves Burning Alms at The Oobleck in Birmingham, and we expect that will be quite a good time. Stream all of the tremendous No One Is Nowhere via the embed below, and click through to purchase.

>> Vancouver-based chillwave producer Ancient Babes' latest track "Atlantic Avenue/Street" may have a somewhat inscrutable title, but it is otherwise a slam dunk. Nostalgic and icy and beautiful, the song has the emotional immediacy of a vintage John Hughes soundtrack selection, with pulsing synths underpinning cool, measured vocals. While the rhythm and "bass" tracks in the verses are somewhat plodding and monolithic, something about the airy atmosphere and chilled vocals makes the song blow by fast -- its end always comes too soon and as a surprise. Indeed, the greatest surprise is the song's quiet final 15 seconds, during which the synths and electronic beats recede to reveal what sounds like hidden piano and guitar tracks, which twinkle briefly and then wink out like dead stars almost as quickly as they are uncovered. We suppose that aforementioned surprise is ultimately a sign of a great pop song, and we will be interested to hear what Ancient Babes is able to conjure next. Stream "Atlantic Avenue/Street" via the embed below, and click through to download the track. We last wrote about Ancient Babes at the beginning of the year here, when the band had just issued its dark and dreamy Futuristic Demons EP. While we weren't looking, the highlight of that short set -- a tune called "Occult Commando" -- was given the NSFW video treatment early this past summer. Check the video for the cut out right here.