Review: Pile | You're Better Than This 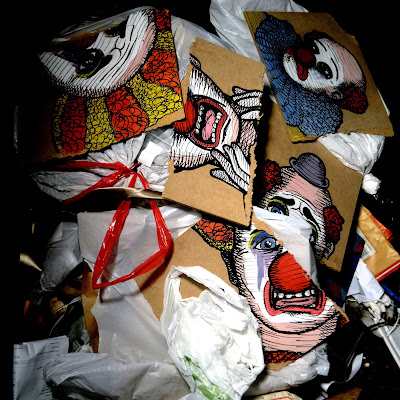 There is an eternal unease, a sort of yearning discomfort (or is it a discomfited yearning?), that permeates the music of Boston post-punk titans Pile. Among the foursome's greatest strengths has been the ability to sew that rankled unease into the lining of each of its songs, imbuing each one with a nakedly human dimension that would seem pretty un-rock 'n' roll were it not for the fact that Pile (higher power-of-your-own-choosing bless Pile) hits the sweet spot where power meets smarts as hard as any act since, say, Jane's Addiction released Nothing's Shocking. The throbbing vitality of Pile's music elevates and even celebrates its unease, and never more perfectly than on its agile and potent new full-length You're Better Than This.

What makes You're Better Than This distinct from the band's previous releases (including 2012's towering Dripping, which we reviewed for another publication here) is an adventurous, elastic production and mix. Fronter and guitarist Rick Maguire's opaque, often inscrutable lyrics are levied in palpable Jon Spencer-esque slap-back, the guitars are firmly panned to the edges of the stereo field, and a big, boisterous ambient room sound is pushed up into the mix, amplifying the dynamics of a band already well known for its crushing shock and awe. The more fluid production and a relative dialing back of viscous sludge and distortion lets the music feel lighter on its feet, at fighting weight. You can feel it in the beautiful, 94-second acoustic guitar ballad "Fuck The Police," in the playful opening of the whirling, deconstructed waltzer "Waking Up In The Morning," and straight through to the giddy rush of the album's hidden final tune "Rock 'N' Roll Forever With the Customer in Mind," perhaps a curt nod to Mr. Maguire's day job.

The set opens with the uneven gallop of "The World Is Your Motel," whose immediate, tilting kineticism gives the feeling that one has caught You're Better Than This in medias res -- in the midst of an airing of acute grievances -- or even in flagrante delicto; the tune's cataclysmic final 50 seconds are ignited by one of many soul-searing howls emitted by Maguire over the course of the record. That stentorian yowl, Kris Kuss' explosive drumming, the massive but impressively controlled riffage: indeed, all the hallmarks of a Pile record are present here.

It would be enough for us if You're Better Than This was comprised solely by its (credited) devastating closing number "Appendicitis." The long tune offers a perfect balance of the grace and, ahem, balls that Pile musters with impressive regularity (we'd say ease, but recent interviews confirm our feeling that Maguire would tell us there's nothing easy about it, were we to ask). As the relatively gentle tune crosses the four-minute mark it seems to swallow Maguire whole, as his vocals sink deep into the skeins of guitar lines just ahead of the song's terminus under some final, chunky chords. You're Better Than This was recorded in Omaha and produced by Ben Brodin, whose production credits do not include work with JSBX or Shellac, but do include Conor Oberst, Seahaven and, weirdly, Jazon Mraz.

Exploding In Sound released You're Better Than This on vinyl, CD, cassette and as a digital download today, and you can purchase the record in any of those formats right here. Stream the entire record via the embed below. Pile is now officially on tour forever; click here to see when they stop by to bring its moveable feast to your mom's house. Dinner is served.