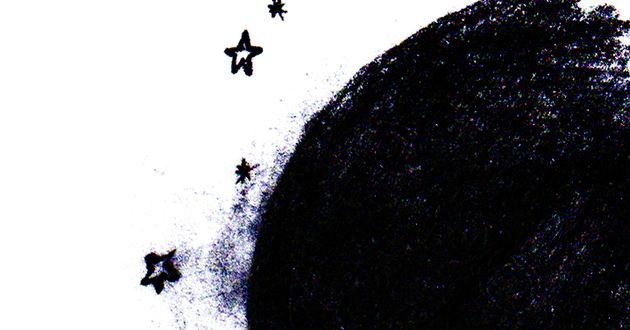 >> Art Is Hard turns out quality indie rock on the regular, but the caliber of its slate of 2015 spring releases appears without equal in the UK so far this year. While the Exeter, UK-based label only recently announced its 2015 singles series, the offering is a very fine successor to its previous efforts. Art Is Hard in prior years delivered to subscribers limited editions of fine rock tunes via postcard and pizza box, but this year its singles series offers new music via micro editions of square vinyl (you read that right) hand-cut in America and hand-stamped and hand-numbered by the label (as in years prior, the music will also be offered as a digital download to non-subscribers). The series is unsurprisingly called The Hand Cut Record Club, and its first offering is the garagey rave-up "Scratch It Off" from scrappy Falmouth, England trio The Red Cords. There's a faint echo of Misson Of Burma's rager "Peking Spring" in The Red Cords' undeniable number (perhaps it is because fronter Charlie's voice sounds a bit like Clint Conley's, perhaps it is just that first chord in the chorus), but the hip-shaking tune is probably more evocative of the blunt-force, early aughts sound proferred by White Stripes and The Hives, and is truly more straightforward and pop-leaning. The Red Cords have a couple older EPs on Bandcamp that are probably worth investigating. "Scratch It Off" (is there a b-side? we don't know! the record is square, damn it!) was released March 14. New singles in the series will be on offer every three weeks, which we believe means the next one comes 'round in a mere days, and there will be 15 in total.

All of that might fully occupy a lesser label, but Art Is Hard appears to be going full bore. On April 13 the label will release a new single from Shunkan, a New Zealand-based indie rock quintet centered around recent émigré Marina Sakimoto, who is originally from Los Angeles. Google tells us that band name can roughly translate from Japanese as "an instant" or "a moment." While that suggests a certain degree of ephemerality (and dovetails nicely with our undergraduate study of ukiyo-e), Shunkan's "Our Names" is immediate and vital, and recalls the gutsy sound of Leeds standouts Sky Larkin. Distorted guitars and a firm mid-tempo snare/kick cadence propels the tune as Ms. Sakimoto describes losing control at a house party. "Our Names" is already available for free download via the embed below, but it is also being released in a limited edition of 100 A6-sized comic books, which will run you £3.75. But wait! There's more! Art Is Hard is also prepping the release of a 12" vinyl comp called Family Portrait Pt. II, the follow-on to its sold-out 2012 Family Portrait comp which featured hitmakers of the day including Playlounge and Joanna Gruesome. Family Portrait Pt. II contains a brace of tunes from each of these up-and-comers: Living Hour, Abbatoir Blues, Fruit Bomb and Bruising. Based on the terrific preview track "Steady Glazed Eyes" from Living Hour, one can assume that the Art Is Hard sound is about to get a lot more reverby. The set will be released May 4 on the aforementioned vinyl and as a digital download; pre-order the vinyl right here. Finally, we encourage you to avail yourself of all of the embedded music below. It's first rate.

>> Word of mouth still matters, and in our over-shared era of overwhelming, quasi-social noise, it is perhaps more important than ever. Exhibit A is New Orleans power-trio Pope, who were brought to our attention by a noted Boston musician and fellow music fan a couple weeks back. Pope's ferocious debut album Fiction was released March 10 by Community Records. Blazing with '80s- and '90s-indebted noise-pop tunes that nearly all hover around the pop-crucial three-and-a-half minute mark, the collection pairs understated male vocals with pounding rhythms and hardcore-derived Marshall overdrive, which suggests all of the following: that Pope knows its way around the first third of the Dinosaur Jr. catalog (there's a tune on Fiction called "Bug," after all); that just maybe Pope is the southern U.S. answer to Canada's lauded Weed; or that Pope is some heretofore unknown cousin to the now late and lamented Ovlov (who announced they would definitely be disbanding -- they mean it this time -- Saturday). While most tunes in the New Orleans act's twelve-song set hew to the same structure –- little introductory fanfare, straight into a towering verse, short-and-sweet, etc. -– it's still easy to pick "Fast Eddy" as the highlight of the bunch (and not only because that was a childhood nickname of this reviewer in his early days of owning a BMX bike). The cut presents with tasteful and unusual chordings during the opening, and later, amid cymbal heavy drum blasts and churning distortion, dry vocals impress due to being both deep and seemingly strained, which creates a cool, mournful effect. Fiction is remarkably consistent and is definitely one of the best new indie-punk records we've heard to date in 2015. All of which makes us here at Clicky Clicky hope for more tips as good as the one that turned us on to Pope -- keep 'em coming! Order Fiction on vinyl from Community right here; the LP's first pressing is 500 pieces in purple and clear mixed vinyl. Houston-based Funeral Sounds issued Fiction on cassette in an edition of 100 clear cassettes with lilac print, in case moderately anachronistic media is your thing, and you can buy one of those right here. Or you can download it for free at Bandcamp here, whatever. Stream the whole coconut via the Soundcloud embed below. -- Edward Charlton